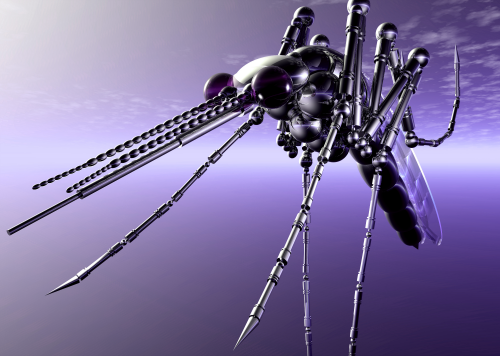 Normally in warfare, bigger is better. Most militaries are always looking for something that’ll make a bigger impact. They want bigger warships, bigger tanks, and bigger explosions. Sometimes however, the littlest things can be the most dangerous. In fact, developments in nanotechnology may be about to usher in a new class of miniaturized weapons that shouldn’t be underestimated.

One unsettling prediction Del Monte’s made is that terrorists could get their hands on nanoweapons as early as the late 2020s through black market sources.

According to Del Monte, nanoweapons are much smaller than a strand of human hair and the insect-like nanobots could be programmed to perform various tasks, including injecting toxins into people or contaminating the water supply of a major city.

Another scenario he suggested the nanodrone could do in the future is fly into a room and drop a poison onto something, such as food, to presumably target a particular individual.

And Del Monte didn’t pull these ideas out of a hat. He’s not just guessing about what kinds of weapons nanotechnology could produce in the near future. He also cites reports from the Pentagon:

Frightening details about military nanotechnologies were outlined in a 2010 report from the Pentagon’s Defense Threat Reduction Agency, including how “transgenic insects could be developed to produce and deliver protein-based biological warfare agents, and be used offensively against targets in a foreign country.”

It also forecast “microexplosives” along with “nanobots serving as [bioweapons] delivery systems or as micro-weapons themselves, and inhalable micro-particles to cripple personnel.”

In the case of nanoscale robots, Del Monte said they can be the size of a mosquito or smaller and programmed to use toxins to kill or immobilize people; what’s more, these autonomous bots ultimately could become self-replicating.

Given their size, it’s obvious that nanoweapons would be perfect for inflicting small numbers of casualties in a precise manner. They would probably be used frequently by governments for clandestine assassinations. If someone keeled over from eating poisoned food, who would guess that the poison was delivered by some flying robot insect? Would anyone even assume that they’d been poisoned?

You also have to wonder how long it would take the public to catch on. Given that the government’s technological prowess often exceeds what we see in the civilian world by a wide margin, they could be snuffing out dissidents for years before anyone realizes how they’re doing it. Who’s to say that the government doesn’t already have this kind of technology?

But perhaps what’s most frightening, isn’t the small scale capabilities of this technology. What’s really scary is how nanoweapons could be used to inflict mass casualties.

Nanotechnology opens up the possibility to manufacture mini-nuke components so small that they are difficult to screen and detect. Furthermore, the weapon (capable of an explosion equivalent to about 100 tons of TNT) could be compact enough to fit into a pocket or purse and weigh about 5 pounds and destroy large buildings or be combined to do greater damage to an area.

Warfare has changed quite a bit over the past hundred years. However, given what we can expect to see in the near future, I don’t think any of us can imagine what warfare is going to look like after the next hundred years.