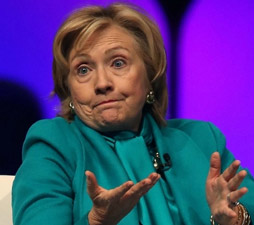 Editor’s Note: In the latest FBI document release we have learned more about the tangled web being weaved by Hillary Clinton and her cronies. As it turns out, the Secretary of State of the United States apparently had no idea how Confidential and Classified documentation was marked. Never mind that the Secretary is one of the few people in this country with the authority to actually determine what can be classified and on what level. And if Clinton’s unsecured email server debacle wasn’t enough, it turns out that the former Secretary misplaced mobile devices and laptops containing highly sensitive material. This is the person now running for the highest office in the land.  In the following article Karl Denninger of the Market Ticker succinctly explains why she is clearly not qualified for the job.

The Smell Test
By Karl Denninger

You have got to be kidding me.

The FBI released it’s (heavily-redacted) report yesterday on Hillary’s email server and their investigation.  Let me just point out a few things; you can read the whole shebang if you wish (I did); agent notes are usually quite dry, and this was no exception.

Incidentally, if you ever talk or work with these guys this is the sort of “memorialization” to expect them to take; it looks right up the middle of the line in that regard, so leave the conspiracy theories at home.

First, we’re supposed to believe that Hillary required no fewer than eight mobile devices during her tenure as Secretary of State.  I don’t know what sort of garbage that is, but they were all BlackBerries, and I will note for the record that BlackBerry makes one of the more-solid pieces of hardware out there when it comes to mobile technology.  I still have two Z10s — one of which I keep in my car as an emergency backup phone — that work fine; I had one that blew up due to a manufacturing defect out of warranty (heat sink paste improperly applied) and a second that my kid legitimately got salty water into and shorted it out.  My kid, who is far rougher than I am on mobile devices, has had two phones in the last four years, one of which (a Z30) she’s still using.  Hillary was SoS for four years and during this time we’re supposed to believe that she destroyed a phone on an average of once every six months.

I make extremely heavy use of my mobile devices and I’ve yet to have one fail in under 2 years.  In addition the BlackBerry series that Hillary was using has replaceable batteries, which is the most-common failure (the battery gets weak and thus the runtime gets too short for your preference.)  It defies credibility to believe that she had eight sequentially defective units during a four year period, or that she managed to wear them out.

The far more-likely reason that none were recovered is that she lost them; that is, she’s basically incompetent when it comes to handling sensitive information or the devices on which it is stored.  If you can’t manage to keep a mobile device in your possession without trashing it over a period of more than six months what sort of qualification do you claim to have to be President of the Untied States?

Second, the record is rife with her repeated claims that she did not understand how to identify and properly classify material as classified.  She claimed she did not know what section-markings were when showed to her in the margin and speculated that they denoted alphabetical order.

Not only does she claim to have been ignorant of these procedures she also claimed not to remember having been read in or out of the SAP programs from which material was found on her server — classified programs that are “special access”, are used for information that would lead to immediate and grave harm to the United States (and/or our personnel) if disclosed and which are strict “need to know” in nature.  These are programs that are so secret in their nature and have such severe consequences if disclosure occurs that even disclosing their name is forbidden.

All of these claims mean that Hillary either lied or was and is today grossly and outrageously incompetent to hold her position, since The State Department is the origin of a great deal of classified information in the first instance and in fact it is a formal, designated-by-law part of the Secretary of State’s position to both originate and designate same.  Even worse, every single day the Secretary of State’s job begins with a classified intelligence briefing!

In other words for those statements not to be a lie Hillary had to lack any sort of capacity to perform her functions as Secretary of State.

I will remind you that a President has even more of an overarching requirement in this regard than does one of his appointees since the Executive is the seat of all foreign policy, and in fact the President receives an even more-expansive classified daily briefing as well!

If Hillary was not lying then she stated, under oath, that she is unqualified for either position by reason of lack of intellectual capacity.

Next up is a flat-out litany of improper acts if there was any classified material in those emails, and we know there was.  It was not only held improperly on her server it was moved around on insecure and unrecovered devices, including at least one laptop and a thumb drive.  It appears that at no time was any form of encryption or other security used and in fact the devices in question were never documented as being properly cleaned of such data or destroyed.  This is an outrageous violation of the protocols involved in handling classified material.

Finally there is evidence in the record that her server was deliberately wiped after a subpoena was served on everyone involved in the server’s maintenance and creation by the US House, including Hillary and her contracted firm.  Once you are in possession of such a legal document you have a lawful duty to be “hands off” in terms of any act that might modify any portion of that which is being sought.  Tampering with same, whether that’s ordering someone to do it or doing it yourself, is nearly always a criminal offense in the form of either obstruction of justice, evidence tampering or both.  As someone who has been subpoenaed in the past (MCSNet used to get them once in a while when I ran the company) I’m very aware of the law in this regard (that’s what lawyers do, and why when you run a company you have real ones you can call and ask questions of — for a price, of course) and my next question has to be why obstruction of justice and/or evidence tampering charges have not been laid given that I’m quite sure both Hillary and contracted firm(s) and persons have at least as good of attorneys on staff and on call as I did.

Folks, there are two possibilities here.  Hillary was either lying through her teeth to the FBI, in which case she is not only unqualified to hold any office and should be under indictment right here and now or she’s grossly incompetent to hold either the office of Secretary of State or President by virtue of lack of the intellectual capacity required to rationally discharge the duties of either office.

There is no other interpretation possible.

This Is The Risk America Faces Now: “An Irrevocable Series Of Events… Up To and Including Civil War”