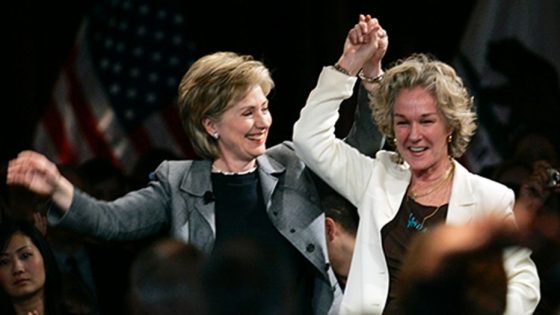 A wealthy backer of Democrat Hillary Clinton has been caught paying off women who would accuse Trump of sexual misconduct.

Susie Tompkins Buell, the founder of Esprit Clothing and a major Clinton campaign donor for many years, gave the money to celebrity lawyer Lisa Bloom who was working with a number of Trump accusers at the time, according to the New York Times’ bombshell report.

Since the report came out on Sunday (New Year’s Eve) many haven’t been able to react to the news just yet.

As the #MeToo movement to expose sexual harassment roils the nation’s capital, political partisans are exploiting the moment, raising hundreds of thousands of dollars to support accusers who come forward with charges against President Trump and members of Congress, even amid questions about their motivation.

As accusations take on a partisan tint, activists and lawyers fear that such an evolution could damage a movement that has shaken Hollywood, Silicon Valley, media suites in New York and the hallways of Congress — and has taken down both a Democratic fund-raiser,Harvey Weinstein, and a conservative stalwart,Bill O’Reilly. -The New York Times

Bloom solicited donors by saying she was working with women who might “find the courage to speak out” against Trump if the donors would provide funds for security, relocation and possibly a “safe house,” the paper reported. Former Clinton nemesis turned Clinton operative David Brock also donated $200,000 to the effort through a nonprofit group he founded, the paper reported in an article entitled, “Partisans, Wielding Money, Begin Seeking to Exploit Harassment Claims.”

According to Fox News, Bloom claims she only contacted women whose stories she could corroborate. (Because she was there? It certainly makes one wonder how many of the accusers are being paid.) The Times article expanded on a report in The Hill two weeks ago that said Bloom worked with campaign donors and tabloid media outlets during the final months of the presidential election to arrange compensation for the alleged Trump victims and a commission for herself, offering to sell their stories.

One of the Bloom clients who DID receive financial help in exchange for her allegations against Trump was New York City makeup artist Jill Harth who herself defended the revelations while claiming that the money had nothing to do with her coming forward in the first place. -SHTFPlan

Bloom, who is the daughter of the infamous attorney and Democrat donor Gloria Allred and, like her mother, specializes in representing women in sexual harassment cases, worked for four women who were considering accusing Trump. Two went public, and two declined.

Sexual harassment and misconduct allegations shouldn’t be taken lightly, but neither should false allegations. Democrats are doing an excellent job of making women who have experienced a horrible sexual harassment look like nothing more than money hungry and biased partisans with an agenda.