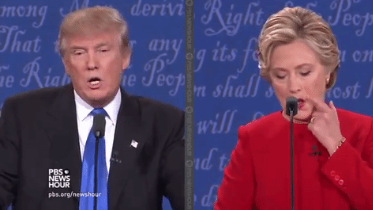 Editor’s Comment: Gee, do you think the debate could have been fixed, and heavily slanted to put Trump on the defensive, while giving Hillary a pass for absolutely everything?

Discussion of Hillary’s use of apparent ‘hand signals’ during the debate has been made more difficult by the use of copyright claims against footage from the debate by a third party, which is having the effect of censoring the web as it vets, analyzes and calls B.S. on every moment of this ridiculously fraudulent 2016 election. Hillary is getting away with murder all over again.

Day in, and day out, there is almost nothing that happens on the Clinton campaign trail that isn’t mired in controversy, and careful manipulation of events to ensure the first female pres.

A video recently uploaded to Youtube depicts the former secretary of state scratching her face several times during the 90-minute debate – signals to Holt, the video’s editor claims, which “meant Clinton wanted to get a ‘zinger’ in and to go to her without changing the subject.”

“The first signal to Holt comes when Hillary wants to get her ‘taxes zinger’ in after Trump talks about the country being in debt.”An earlier version of the video was taken down from Youtube citing a copyright claim by [Merlin] SC Distribution.

Reporters at TruePundit.com claim there were no such signals used by Clinton in previous debate performances.

“True Pundit cross referenced Clinton’s speeches, campaign appearances and her 2008 debate performances against President Obama,” the website reports. “According to that analysis, Clinton never previously used these hand motions to supposedly scratch her face. In fact, she rarely touches her face at all.”

Curious. Do the poker pros like @themouthmatusow see this as a “signal” to moderator Lestor Holt. https://t.co/3uQbpbhSQe

Wow ive watched the debates 3 times & never noticed!! I felt the whole time she had the questions but after watching that i she def signals https://t.co/dOSZlmfB9G

Analysis following the debate showed Holt came down harder on Trump, interrupting him 41 times during the event compared to Hillary’s seven interruptions.