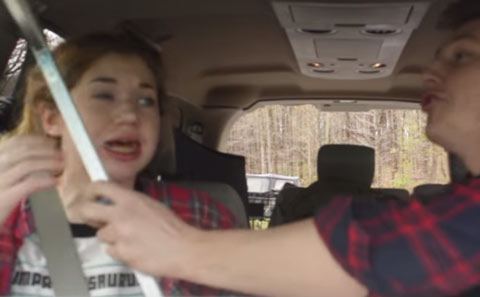 In what may be the funniest video you see today, two brothers and their mother played a pretty hilarious practical joke on their little sister.

The sister had her wisdom teeth pulled and after the surgery she was a bit out of it.

Not letting a good opportunity go to waste, the brothers conspired to convince their sister that a viral infection was spreading across the city, complete with a fake emergency message from the CDC.

Once convinced that it was happening, the sister was asked to make some split second, life-saving decisions that included deciding between taking the dog or the cat, whether they needed Funfetti or chocolate, and if Mexico was the best place to bug out.

The Prepper’s Blueprint: How To Prepare For A REAL Zombie Apocalypse

Top Tier Gear USA: This Will Protect You From A Bio-Weapon Attack (As well as Chemical, Nuclear or Radiological WMD)

Evac Strategy: How To Create a Coordinated Bug Out Plan

The Prepper’s Conundrum: To Bug in or Bug Out?

5 Awesome Backpacks That You’ll Want To Bug Out With