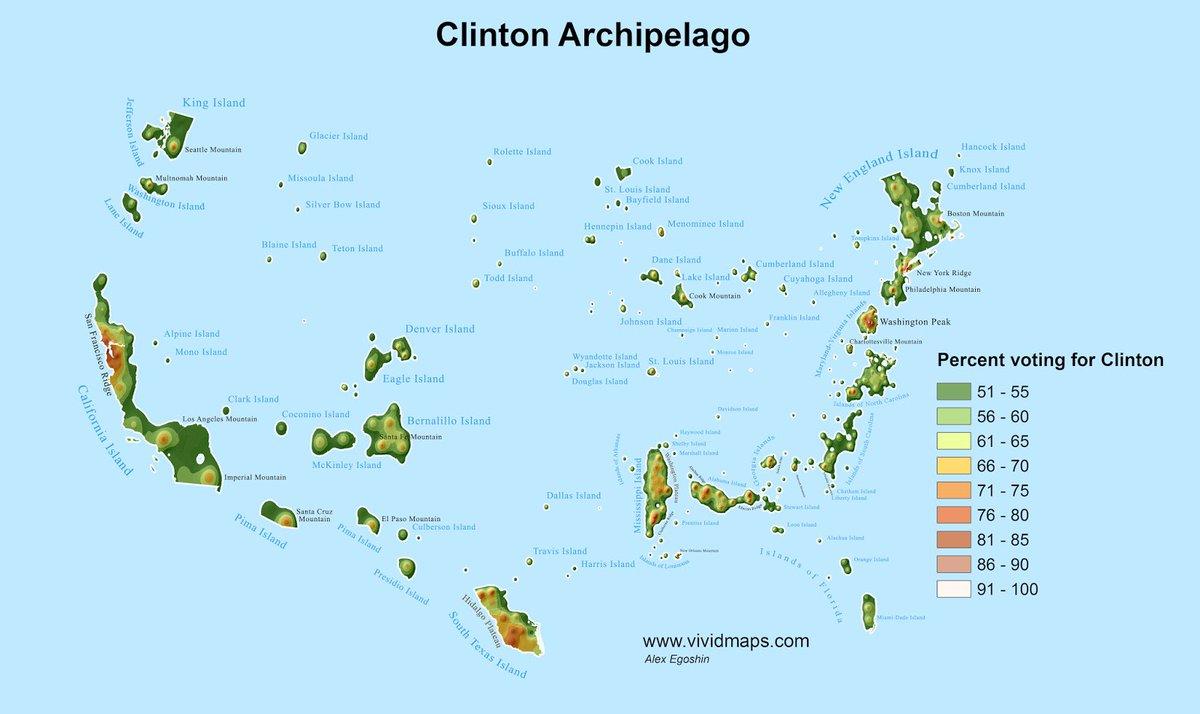 OK, this is actually pretty obvious – but it is worth pointing out that the “archipelago” of islands across the vast expanse of the United States that carried the vote for Hillary Clinton during the election – also happens to be a ring of the liberal cities that:

a) have exploded with crime, riots and unrest

c) are going bankrupt and will be unable to fulfill pension obligations, or pay their share of social security, welfare, etc.

d) have been foremost in advocating gun control, and ensuring that only criminals and police have guns, while 2nd Amendment arm-bearing citizen have flocked to the rural areas where their rights are not generally restricted

e) will be the first places to be become unstable during any major crisis – as soon as grocery store shelves go empty. Martial law will be the only way to maintain stability, and that will come at a further price to liberty.

f) will be the first place to line up for FEMA camps and beg for food, shelter and rations, again, at a further price to liberty

Of course, there are many more items that could be added to the list, but it gets tedious, and I think everyone gets the point.

Liberal havens have become largely clueless about the real world about them, and have turned a blind eye to the destabilizing forces that are compounding upon them.

IF/WHEN the SHTF, these will be the absolute last places you’d want to be caught dead.

IF you were clueless enough to believe Hillary’s lies and endorse the collapsing establishment line, then there’s a very good chance that you’ll have no idea what to do when the system breaks down. You will either help fuel or be caught up in chaos, violence and desperation – don’t let that be you.

As All News Pipeline reported:

Getting as far away from the large population hubs in America as possible should be looked at as ‘survival rule #1’ as ‘population density’ is one of the most important survival criteria. And with America’s large cities overwhelmingly voting for Hillary Clinton and ‘snowflake’ after ‘cupcake’ having nervous breakdowns recently, finding a place out in the mountains or the country should be a priority for anyone still stuck in the cities or large suburbs. Should chaos strike, would you rather ‘already be where you’re going’ or stuck with 100,000 or more ‘cupcakes’ trying to ‘get away’ from the madness?

And as SHTF noted last week:

Places like Baltimore, Detroit, Washington D.C., New York, Philadelphia and other cities across the map are still deeply divided often police and race issues. Many have seen serious riots, looting and unrest. These social wedge issues are still being pushed from moneyed political interests, while political divide after the direction of the country has become sharp.

Dallas, Texas just suspended pension payments for some of its civil servants, a sign that financial insolvency could create an epidemic during the next crisis. Several states, like California, have over promised benefits to state employees in the pension programs, without ever planning to pay for them. If people lose it, Los Angeles, San Francisco, San Diego and the whole of the surrounding areas could simply erupt. Similar problems have left Detroit, Michigan and Puerto Rico, the commonwealth island, extremely vulnerable to bankruptcy and economic apocalypse that could contaminate the nation and global within hours.

If a natural disaster, such as a hurricane, hits the East or Gulf Coast, tens of millions of people could be caught up in traffic, locked in cities without food, and desperate to cling to order and survive. Likewise, if a major earthquake hit the West Coast, millions could be displaced and left without many options. That’s when things turn ugly.

When these cities break down, you’re going to want to be far away from them, and far from the path of millions exiting them and looking for food, resources… and anything they can take.

Merry Christmas, Happy Holidays… and stay out of harm’s way, whether it be in these disaster zone cities, or any other known risk potential.

Stay prepped, and stay focused on what may prove to be a difficult time ahead.

The Prepper’s Blueprint: The Step-by-step Guide to Help You Prepare for Any Disaster

“After Armageddon”: Marine Shows How to Survive An Urban Disaster

25 Cities On the Brink of Disaster: “Don’t Be Here When Things Get Violent, Unsafe and Fragile”