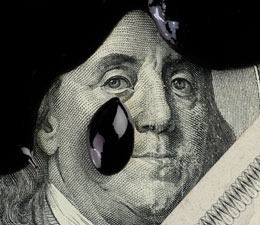 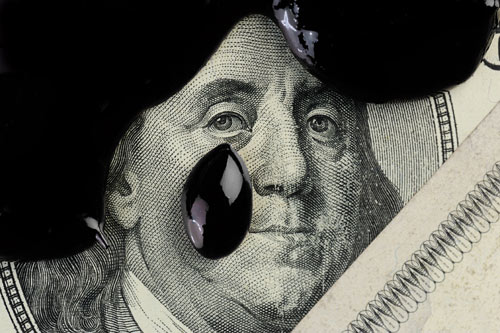 The information in this article will be a short synopsis of how the Petrodollar was created, in order to allow the readers to tie in an understanding to the bigger picture we face today.  We have all seen the volatility in the oil markets and the steady, daily decline in the BDI (Baltic Dry Index), both of which indicate the disease affecting the global economy.  That disease is almost terminal; the policies surrounding the Petrodollar and its influence are major contributing factors to the rapidly-deteriorating world economies that are on the brink of crashing.

Oil is the most important commodity from an economic perspective, and from the drilling of the first oil well in 1846 in Azerbaijan, formerly known as Baku, the world has embraced the search for and use of it.  Today oil is to be found in every facet of life, from the plastic spoon to the gasoline pump.  John D. Rockefeller built an oil refinery in Cleveland, Ohio in 1863 and subsequently formed Standard Oil of Ohio in 1870.  At its peak, the company controlled the market domestically, owning 90% of the U.S. oil industry until the company was broken up in 1911.  The Supreme Court had deemed it a monopoly, and it separated into smaller firms.

Shortly after World War II, the oil-rich governments around the world began to despise American control over their resources; therefore, the largest producers nationalized the oil fields and their own levels of domestic production.  Saudi Aramco formed in Saudi Arabia became the recognized leader of crude oil production in the world.  Then in 1949, U.S. domestic production of crude oil could no longer keep up with the country’s industrial demands.  For the first time, the U.S. became an importer of crude oil.

In July of 1944, the Bretton Woods Conference (officially the United Nations Monetary and Financial Conference) took place in New Hampshire.  The conference lasted for almost a month, and 730 representatives from the 44 allied nations participated in it.  After the conference was concluded, the postwar global financial structure had been decided: gold had been fixed for delivery by the United States at $35 per ounce, and each signing member of the participants agreed on a fixed rate of exchange for currencies.

Meanwhile for the next several decades, the deficit in trade rose in the U.S., along with price inflation that began to erode the confidence in the American structure.  As a result, France withdrew its gold stored with the Federal Reserve in 1967.  Then in 1971, Nixon closed the door by removing the ability of any member nation to convert into gold.  The dollar (used as the world’s reserve currency) was still the reserve; however, it was completely fiat at this point.  At this time, President Nixon dispatched Kissinger to Saudi Arabia with a scheme that made extortionists pale in comparison.

The ruling House of Saud in Saudi Arabia was offered a deal by Kissinger with four parts.

In return for such “magnanimous” services, the Saudi Arabians would make sure that all oil sales were done only in U.S. dollars.  In addition, the Saudis promised to take their profits and invest them in U.S. treasuries.

The gold would not be needed.  With all oil being sold in U.S. dollars, the other nations were obliged to build up a supply of dollars on the fixed currency exchange to buy the oil.  The Saudis signed on to this in 1974, and shortly thereafter in 1975, the other oil producing countries of OPEC followed suit.  You may notice there was roughly a three-year hiatus for the former, a four-year gap in the latter.

There was a fly in the ointment: The Yom Kippur war of 1973, in which these previously-hesitant nations realized that Israel was a threat to them.  Immediately following this conflict, OPEC raised its price of crude oil by 70% and then cut levels of production by 5%, taking oil from $3.00 per barrel to $12 per barrel virtually overnight.  The embargo lasted from October 1973 to March of 1974, before pressure from the Nixon administration and the threat of Israel and other potentially threatening nations took effect.

So in 1975, the world’s demand for oil was skyrocketing, and all sales were now conducted in U.S. dollars, placing the U.S. over all of the world’s economy for decades.  The underlying illness was the festering fiat currency and the accompanying paradigm shift that saw the decline in American domestic manufacturing and the reduction of our economy to one that was consumer-based, until we reached the point we are today.  In the next article we will examine where the Petrodollar stands as the world’s currency reserve, and cover actions and leading indicators that help to forecast what will be coming down the pike.