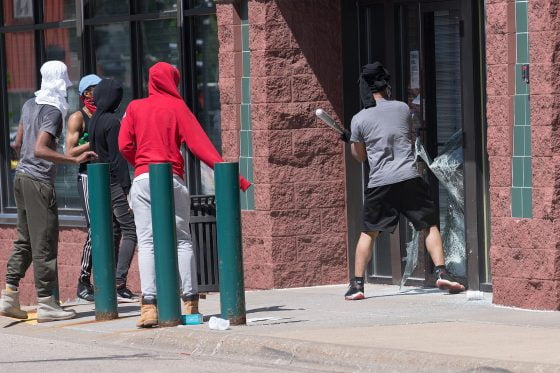 America is falling, is falling, and violence covers the land like a flood.  Let us cry for this once great land because a day of reckoning is at hand.  As I was reflecting on the nightmarish events of the past several days, a line from a song from one of my favorite bands of all-time kept coming to mind, and I have made that line the title of this article.

Do you think that it is just a coincidence that so many of our young people are completely and utterly lawless?  We raised them in a completely upside-down society that says that good is evil and evil is good, and so the way that they are behaving now shouldn’t surprise us at all.

If our young people truly wanted to honor George Floyd, looting retail stores is definitely not the way to do it.  Sadly, many are taking advantage of this crisis to go on a crime spree, and we are witnessing looting on a scale that is unlike anything we have ever seen before in this country.

For example, one of the most famous retail stores in the heart of New York City was absolutely mobbed by looters on Monday night…

Disturbing footage shows swarms of looters rushing into one of the world’s most famous stores — Macy’s flagship on Herald Square — as Midtown descended into chaos overnight.

One overhead video showed looters racing into one of the boarded-up entrances shortly before the curfew started Monday night — with only a small unexplained explosion seeming to halt the rush.

There has been a tremendous amount of looting on the west coast as well, and a video that showed a wild mob voraciously looting an Amazon delivery truck made headlines all over the globe…

While looters targeted various clothing stores in Santa Monica, one onlooker posted a video to social media showing a group of people breaking into an Amazon van, throwing objects at the vehicle to break its windows before gathering in the back as a larger group of people appeared to run away with packages.

What in the world has happened to us?

I have been asking that question a lot lately.

To me, it is absolutely unthinkable that looters would be allowed to loot a store for 15 hours straight, but that is precisely what just happened at a ShopRite location in Philadelphia…

The owner of a West Philadelphia ShopRite says looters ravaged his store for 15 hours straight, taking whatever they wanted from the pharmacy, liquor department and cash register. Owner Jeff Brown says looters ransacked the ShopRite of Parkside and several other businesses at the ParkWest Town Center on 52nd Street over the weekend.

Many of the businesses were already on financially shaky ground after weeks of COVID-19 closures. They’re now left cleaning up massive damage.

Where else in the entire world would such a thing be permitted to happen?

Once upon a time we thought of ourselves as a shining example for the rest of the planet, but now the only example we are setting is a bad one.

One of the things that has been particularly alarming to me is the amount of violence that we are seeing directed toward police officers.  In St. Louis, four officers were shot by rioters last night alone…

Four police officers were shot in downtown St. Louis early Tuesday as a day of peaceful protests turned into a violent and destructive night in the city.

Hundreds of people had gathered across the St. Louis region Monday to protest the Memorial Day death of George Floyd in Minneapolis.

And in Las Vegas, one police officer is fighting for his life after being shot in the head…

In a night of deadly violence aimed at police officers, a cop in Las Vegas was shot in the head and is now on life support.

Despite George Floyd’s own family calling for an end to violence, multiple cities were again hit by mayhem last night.

A suspect was taken into custody after an LVMPD officer was shot in the head near Circus Circus late last night.

Being a police officer in this environment is one of the hardest jobs in America.

And things are not going to get any easier in the days ahead.

So many of these young people have hearts that have gone completely ice cold, and they don’t seem to have respect for even the most basic human values.  A perfect example of what I am talking about just took place in Richmond, Virginia…

The chief of the Richmond, Virginia, police department said Sunday that rioters set fire to a multi-family home with a child inside while blocking access for firefighters to get through to save the child.

“One incident that is particularly poignant, that truly illustrates the seriousness of the issues we’re facing,” Chief Will Smith told reporters. “Protesters intentionally set fire to an occupied building on [West] Broad Street. This is not the only occupied building that has been set fire to in the last two days.”

When I use the word “evil” to describe such people, I am not exaggerating one bit.

Unfortunately, many Americans are still in denial about how badly our society has decayed.

Did you know that there are people that actually write to me to tell me that my articles are “too negative” because I report about such things?

I suppose that we could all stick our heads in the sand and pretend that everything is going to be just fine somehow, but that wouldn’t do anyone any good at all.

What we desperately need to do is to fundamentally change course as a nation and start focusing on solutions that will give us real hope.  With that in mind, let me try to end this article on a positive note.  The title of this article was taken from a song entitled “Morningstar” by a band called Whiteheart, and the following are the full lyrics to that song…

Hear the tale of a fallen people
Destined to wander their broken land
Their eyes are vacant,
Full of empty meaning
What they’re missing they just don’t understand

About the Author: I am a voice crying out for change in a society that generally seems content to stay asleep. My name is Michael Snyder and I am the publisher of The Economic Collapse Blog, End Of The American Dream, and The Most Important News, and the articles that I publish on those sites are republished on dozens of other prominent websites all over the globe. I have written four books that are available on Amazon.com including The Beginning Of The End, Get Prepared Now, and Living A Life That Really Matters. (#CommissionsEarned) By purchasing those books you help to support my work. I always freely and happily allow others to republish my articles on their own websites, but due to government regulations, I need those that republish my articles to include this “About the Author” section with each article. In order to comply with those government regulations, I need to tell you that the controversial opinions in this article are mine alone and do not necessarily reflect the views of the websites where my work is republished. The material contained in this article is for general information purposes only, and readers should consult licensed professionals before making any legal, business, financial, or health decisions. Those responding to this article by making comments are solely responsible for their viewpoints, and those viewpoints do not necessarily represent the viewpoints of Michael Snyder or the operators of the websites where my work is republished. I encourage you to follow me on social media on Facebook and Twitter, and anyway that you can share these articles with others is a great help.  During these very challenging times, people will need hope more than ever before, and it is our goal to share the gospel of Jesus Christ with all many people as we possibly can.