HAVE MERCY: AMERICANS BLIND TO INFLATION!

Growing up, I can remember my good friend that used to sit next to me in most classes at elementary school. He wasn’t the best of pupils, but wasn’t a slacker either.

He was an average student by all accounts, keeping up with the class, but not excellent or gifted.

When we began middle school, I noticed his grades dropped by 35% in the first semester; it was shocking to see!

He used to hand in these amazing papers and do all of his homework to the latter, but the quality of his work was plummeting and I couldn’t understand what caused this negative change.

Then, he told me… he explained that in elementary school, his mother used to do 75% of his homework and 100% of the creative projects; in essence, she made sure he had good grades, but this made him lazy and actually created skill atrophy for him.

His parents had gotten a divorce and his mother was working full-time, so she couldn’t “help” him anymore; he was struggling, so she bridged that gap by hiring a tutor, except the tutor didn’t agree to cheat and do the assignments for him.

His mother couldn’t find a new one, so his artificial and fake scores were exposed for the first time.

Trump’s and Biden’s administrations saw the crisis unfolding in the job market and wanted to bridge the gaps created by the restrictions and curfew/quarantine mandates. They issued stimulus checks and other forms of aid, such as extended unemployment benefits.

Right now, the need for these is drastically subsiding and causing laziness, if anything! The reluctance to make tough decisions and limit unemployment benefits is causing a labor shortage, since people are comfortable with the free-money arrangement!

Why come to work, the average person ponders, when Uncle Sam can pay him to do nothing?

Bottom line is that when your mama does your homework, why come to class?

I’ll tell you exactly why: School isn’t real life, and when you need to face reality as a grown-up, you’ll be ill-equipped and unprepared for what’s to come.

Here’s the other problem this fake world creates: 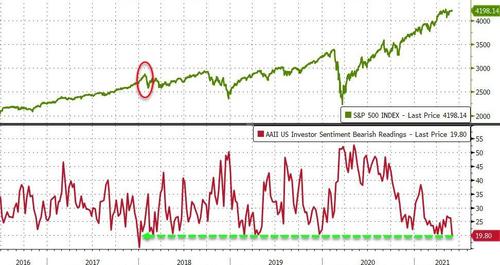 Because mothers were the ones doing the homework, the teachers thought their classes were doing great. They were cheerful, optimistic, and didn’t understand that they had a real problem on their hands; it wasn’t just my friend’s mother — there were several others!

Teachers were “bullish” on their students, but shouldn’t have been…

Good thing we have real indicators from the real world to judge just what is going on: 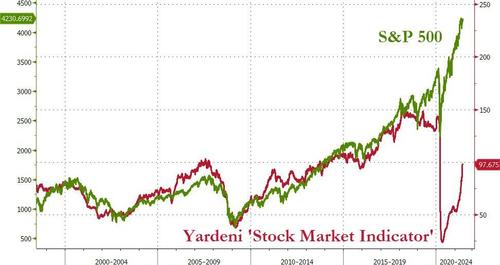 In other words, investors are bullish on equities but are seeing a murky picture of things.

Reality is masked by excessive borrowing, which makes corporations look more profitable than they are and, of course, by the delusion that deficits don’t matter.