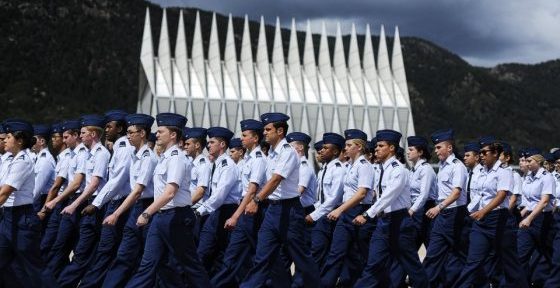 A black Air Force cadet has admitted to writing racial slurs targeting blacks attempting to generate hate crime outrage. The Air Force Academy announced on Tuesday that the black cadet who was supposedly the victim of the racial slurs was, in fact, responsible for writing them.

Officials said the cadet admitted to being behind the racist messages that appeared outside the doors of five black cadets’ rooms, KMGH-ABC reported. The Air Force Academy has also confirmed that the cadet responsible for the messages is no longer at the school, but they failed to clearly state whether or not he left of his own free will.

“There is absolutely no place in our Air Force for racism. It’s not who we are, nor will we tolerate it in any shape or fashion,” Lt. Gen. Jay Silveria, superintendent of the U.S. Air Force Academy, said. “I’ve said it before, the area of dignity and respect is my red line. Let me be clear; it won’t be crossed without significant repercussions.” The Air Force immediately began investigating the incident after it occurred in September.

But these incidents keep happening. Hate crimes should not be tolerated, but neither should faking them. According to the Daily Wire, a similar incident happened just last week. An African American man alleged that someone wrote racial slurs all over his car when he was the one who wrote the slurs. The man, 21-year-old Dauntarius Williams, came forward and admitted that he staged the entire event.

One should be outraged as Silveria says.  Not just as an “airman” but as human beings. Not only do we treat each other with condemnation and hostility, but we also fake horrible things, like this hate crime hoax in the name of creating more outrage.