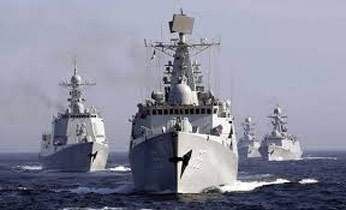 Editor’s Comment: With the United States already at fever pitch with Russia over the Syrian and Ukrainian crises, why not start some stuff with China too? It is clear that foreign policy – directed by our misleaders – is more and more intent on sowing chaos. Why do it? In a truly bad economy, as the U.S. had in the decade prior to WWII, it is last ditch Hail Mary! effort to turn a profit through the industry of suffering and death.

Mere stoking of tensions may be enough for awhile, but eventually, the investors are going to be eager for the real thing. Someone really must stop all this.

‘Mentally Unstable’ Obama Looking To Start A War With China?

This week, Barack Obama sent a guided missile destroyer into disputed waters in the South China Sea to see if the Chinese would start shooting at it. Yes, this is what he actually did. Fortunately for us, the Chinese backed down and did not follow through on their threats to take military action. Instead, the Chinese have chosen to respond with very angry words. The Chinese ambassador to the United States, Cui Tiankai, says that what Obama did was “a very serious provocation, politically and militarily.” And as you will see below, a state-run newspaper stated that China “is not frightened to fight a war with the US in the region”. So why in the world would Obama provoke the Chinese like this? Yes, the Chinese claims in the South China Sea are questionable. But there are other ways to resolve things like this. My friend Rick Wiles began his radio broadcast yesterday by suggesting that these kinds of actions show that Barack Obama has become “mentally unstable”, and I would have to agree. You don’t risk military confrontations that could potentially spark World War III unless you have a really good reason to do so.

The Global Times is a Chinese state-run newspaper that has very close ties to the Communist party. After Obama’s provocation in the South China Sea, it published an editorial entitled “After the show, it’s time for US destroyer to leave“. The following is the most alarming portion of that editorial…

In face of the US harassment, Beijing should deal with Washington tactfully and prepare for the worst. This can convince the White House that China, despite its unwillingness, is not frightened to fight a war with the US in the region, and is determined to safeguard its national interests and dignity.

Beijing ought to carry out anti-harassment operations. We should first track the US warships. If they, instead of passing by, stop for further actions, it is necessary for us to launch electronic interventions, and even send out warships, lock them by fire-control radar and fly over the US vessels.

The People’s Liberation Army Daily, China’s leading military newspaper, used a front-page editorial to accuse the US of sowing chaos in countries such as Afghanistan and Iraq.

“Cast-iron facts show that time and again the United States recklessly uses force and starts wars, stirring things up where once there was stability, causing the bitterest of harm to those countries directly involved,” the newspaper said, according to Reuters.

But the Obama administration is not backing down.

In fact, CNN is reporting that the decision has already been made to send even more patrols cruising by the disputed islands.

What do you think that will do to our delicate relationship with China?

Most Americans assume that an actual shooting war between the United States and China is not even within the realm of possibility, but many of our leaders see things very differently. For instance, just check out what CIA Deputy Director Michael Morell thinks…

The current posturing in the area has led to heightened tensions between the world’s preeminent military powers, and in May Former CIA Deputy Director Michael Morell told CNN that the confrontation indicates there is “absolutely” a risk of the U.S. and China going to war sometime in the future.

Earlier this year, billionaire investor George Soros also cautioned that the ruling Communist Party may see fit to rally its population around an external threat in order to head off a societal collapse in the aftermath of an economic implosion.

“There is a real danger that China will align itself with Russia politically and militarily, and then the threat of third world war becomes real,” said Soros.

Needless to say, if our relationship with China breaks down that is going to be really, really bad for the global economy. China accounts for more global trade than anyone else in the world, and the U.S. is number two.

And already we are witnessing a slowdown in global trade which is more than just a little bit alarming. So far in 2015 total global trade is down 8.4 percent, U.S. exports are down 11 percent, and Chinese imports during the month of September were down a whopping 20.4 percent from a year earlier.

So what do you think that an actual shooting war between the two great economic superpowers would do?

Meanwhile, the Obama administration continues to move toward sparking World War III in the Middle East as well. On Tuesday, we learned that Obama has authorized “direct action on the ground” in Iraq and in Syria. That means that our boys and girls could potentially end up in combat in areas inside Syria where the Russians are currently conducting operations. The following comes from NBC News…

Defense Secretary Ashton Carter said Tuesday that the U.S. will begin “direct action on the ground” against ISIS forces in Iraq and Syria, aiming to intensify pressure on the militants as progress against them remains elusive.

“We won’t hold back from supporting capable partners in opportunistic attacks against ISIL, or conducting such missions directly whether by strikes from the air or direct action on the ground,” Carter said in testimony before the Senate Armed Services committee, using an alternative name for the militant group.

When pressed, Carter admitted that U.S. soldiers “will be in harm’s way, no question about it“.

Wasn’t Obama supposed to be the president that brought all of our troops home and ended all of the wars?

Instead, his arrogance just seems to grow by the day and he is threatening to plunge the entire planet into World War III.

So what do you think of Barack Obama’s recent “foreign policy decisions”?