‘Ground Zero’ Of The ‘Amphibian Apocalypse’ Found: ‘When The END TIMES Started’ 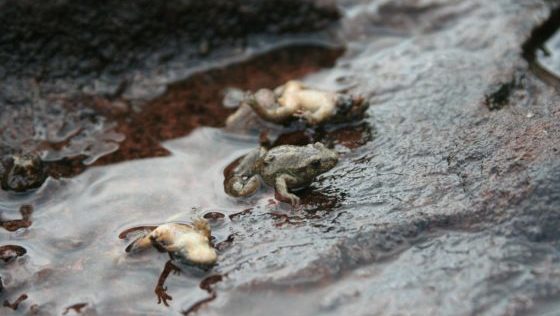 An ancient skin-eating fungus is killing off hundreds of species of amphibians, and the source of this apocalypse was just found.  Compounding the issue is the assertation that the Korean War may have helped amplify the problem and spread the fungus.

Since the 1970s, the aquatic fungus Batrachochytrium dendrobatidis has triggered die-offs in hundreds of amphibian species such as the common midwife toad (Alytes obstetricans), according to National Geographic.

This is a big deal for the balance of life on Earth, and no one says it quite as eloquently as James Woods via Twitter:

One of those neglected news articles viewed in retrospect years from now when people will say, “That’s when the End Times started, but we didn’t realize it at the time…” https://t.co/US1Dtegcpx

This ecological super-villain, the chytrid fungus Batrachochytrium dendrobatidis, has driven more than 200 amphibian species to extinction or near-extinction forcing the radical rewiring of ecosystems all over Earth.  The fungus, called Bd for short, is so deadly because it targets amphibians’ porous skin, which the animals use to breathe and drink water. Bd unspools the skin’s proteins and feasts on the resulting spaghetti of amino acids. As it does, infected animals grow lethargic, shedding their skin in a death spiral that ends with heart failure in a matter of weeks. Some amphibians can tolerate or resist Bd, but the fungus can infect at least 695 species to varying degrees.

In person, Bd infestations can look like biblical plagues. Each August, adult midwife toads in the French Pyrenees climb out of their birth lakes for the first time. The infected toads barely make it to shore. “They’ll do one last hop, and then they’ll expire in your hands,” says Fisher, one of the study’s coauthors. “You can walk the lakes—it’s just carpets of dead frogs.”

“This is the worst pathogen in the history of the world, as far as we can tell, in terms of its impacts on biodiversity,” says Mat Fisher, an Imperial College London mycologist who studies the fungus. “This is pretty unusual for a disease, to see it affect so many different species,” says University of Maryland biologist Karen Lips, an amphibian-decline expert who wasn’t involved with the new study.

But it goes from bad to worse. A global team of 58 researchers has uncovered the creature’s origin story. A groundbreaking study published in Science on Thursday reveals where and when the fungus most likely emerged: the Korean peninsula, sometime during the 1950s. From there, scientists theorize that human activities inadvertently spread it far and wide leading to the amphibian die-offs across the Americas, Africa, Europe, and Australia.

“[The pathogen’s spread] could have happened from any one event, from the cumulative number of events, or maybe some big anthropogenic events like the Korean War,” says Imperial College London researcher Simon O’Hanlon, the study’s lead author.