Graphic Video: The Only Proof You Need That Guns Save Lives: “I Did The Right Thing” 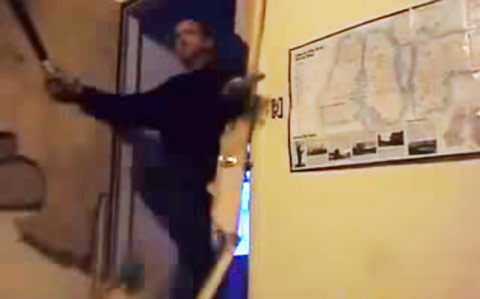 What would you do if you were minding your own business in the comfort of your own home and a machete-wielding maniac started kicking in your door?

If you don’t have a firearm you’d likely panic, pick up the phone, and hope that 9-1-1 can get a police officer to your house in the next 15 seconds.

If you are an armed homeowner, however, you’ve not only given yourself a fighting chance, but you have the distinct advantage of being on your own turf and capable of dispatching the threat with near instantaneous results.

This is exactly the scenario James Cvengros was presented with recently when his insane neighbor Twain Thomas started screaming and becoming violent in the hallway of the apartment building in which Cvengros lives. Cvengros turned on a camera and pointed it at his front door just in case. As you’ll see in the video below, Thomas can be heard causing quite a ruckus outside, prompting Cvengros to take a look. He quickly closed and locked his door and waited.

Sure enough, a few seconds later Twain Thomas’ foot can be seen coming through his front door, at which point Cvengros warns that he has a gun. The would-be attacker, with machete in hand, would not be deterred.

As he comes through the door Cvengros discharges three bullets into Thomas’ chest.

Cvengros: “I didn’t want to do that… You were gonna kill me”

Cvengros: “Well then I did the right thing”

In the aftermath of the shooting Twain Thomas can be heard gurgling and writhing in pain. A fitting result for someone who intended to do harm to the two innocent people who were doing nothing more than spending an evening at home.

Had there been no firearm in this home things could have gone a totally different direction and it’s quite possible the Cvengros, his wife, as well as Thomas’ partner with whom he was arguing could all be dead.

In the right hands, guns save lives. They are the great equalizer.

No further evidence is necessary.

Update: Twain Thomas survived his wounds and has been charged with two counts of attempted murder, aggravated battery and aggravated burglary.