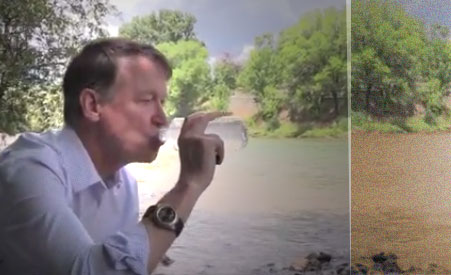 It wasn’t, but it may well have been Fukushima all over again. The full truth will never be told about the level of contaminants spilled into the river.

Maybe the stakes aren’t as high as the meltdown that continues to threaten ocean life and the planet, but the pattern is the same.

After Fukushima, a Japanese MP was apparently under pressure to drink potentially radioactive water collected from the failed nuclear plant to make the delicate case that all is well and that the water is safe to drink. In spite of the truth, he gulped it down. Really, watch the video. He didn’t look too confident, though.

Government stooges will go the distance to cover-up for their crooked, fascist business partners.

No matter how bad the problem is. Every time.

This time, it is the Gov. Hickenlooper of Colorado, in a stunt he may well regret.

Then again, maybe not, as he has apparently also swallowed fracking water. CBS Denver reports:

Gov. John Hickenlooper, who famously said he drank fracking fluid to make a point about its safety, drank from the recently contaminated Animas River on Wednesday.

Three million gallons of waste from the Gold King Mine poured into the Animas River last week, prompting a state of emergency and a shutdown of all river activities.

To make a point about its safety, the governor drank water straight from the Animas River, as captured by the Durango Herald.

But the point was deliberately contradictory – and deceptive.

The governor drank, but noted that he  purified the water for the stunt… all while advising the public AGAINST drinking the water, because river water is ‘never safe to drink.’

The newspaper said he wisely used a purification tablet to kill any bacteria.

Officials said it is not advised for citizens to do the same because although the river is said to be at its pre-spill condition, it was not safe to directly drink from even prior to the disaster.

Instead, he claims the river is safe only for rafting and similar purposes, reiterating that the public should not drink river water at all. The water was back to ‘pre-incident’ levels… as if no spill took place… but is still not safe for drinking.

So why did Gov. Hickenlooper drink that stuff if it wasn’t safe to drink? Did he even really drink THAT water?

Apparently, it was all just a ploy for disaster management. Never mind reality. Just pretend that everything is under control.

And that nonsense, after the EPA was brought under suspicion by an op-ed published beforehand that predicted the EPA would trigger its own disaster at the river site in order to secure hundreds of millions of dollars in funding for a Superfund site. Zero Hedge reported:

A week before The EPA disastrously leaked millions of gallons of toxic waste into The Animas River in Colorado, this letter to the editor was published in The Silverton Standard & The Miner local newspaper, authored by a retired geologist detailing verbatim, how EPA would foul the Animas River on purpose in order to secure superfund money…

“But make no mistake, within seven days, all of the 500gpm flow will return to Cememnt Creek. Contamination may actually increase… The “grand experiment” in my opinion will fail.

And guess what [EPA’s] Mr. Hestmark will say then?

Gee, “Plan A” didn’t work so I guess we will have to build a treat¬ment plant at a cost to taxpayers of $100 million to $500 million (who knows).

Reading between the lines, I believe that has been the EPA’s plan all along”

What is really going on with this carefully staged environmental disaster?

And what is going unnoticed here?

From Fukushima, to the BP oil spill, to the Animas River, officials could not fail harder at protecting the public, and yet they laugh all the way to the bank every time, while the public remains at risk and without proper information about the full extent of what has really happened.