Government Surveillance: Those Signs Showing Your Speed May Be SPYING On You 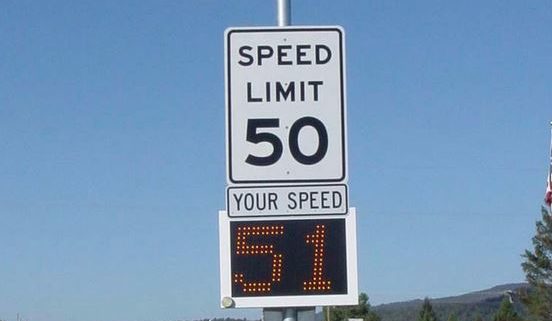 Those signs that show you how fast you are traveling may be a part of a United States government surveillance program. That sign might not only be there to remind you what the speed limit is but a part of a dystopian “Big Brother” spy network.

“There used to be an old police saying, ‘If you robbed a bank, please drive carefully,’” former NYPD Detective Sergeant and Bronx Cold Case Squad commander Joseph Giacalone told Quartz. Giacalone that if a getaway driver didn’t do anything to attract the attention of police and get pulled over, they usually had a half-decent chance of fleeing. “But that’s no longer in effect because you can drive slow, you can stop at every red light, but these license plate readers and surveillance cameras track your every movement.”

According to recently released US federal contracting data, the Drug Enforcement Administration will be expanding the footprint of its nationwide surveillance network with the purchase of “multiple” trailer-mounted speed displays “to be retrofitted as mobile LPR [License Plate Reader] platforms.” The DEA is buying them from RU2 Systems Inc., a private Mesa, Arizona company.  But that’s not all.  Two other related contracts have been found, as reported by Quartz.

The two contracts show that the DEA has hired a small machine shop in California, and another in Virginia, to conceal the readers within the signs. An RU2 representative said the company providing the LPR devices themselves is a Canadian firm called Genetec. The DEA’s most recent budget describes the program as “a federation of independent federal, state, local, and tribal law enforcement license plate readers linked into a cooperative system, designed to enhance the ability of law enforcement agencies to interdict drug traffickers, money launderers or other criminal activities on high drug and money trafficking corridors and other public roadways throughout the U.S.” But focuses primarily along the southwest border region, and the country’s northeast and southeast corridors.

The problem, however, is a big one. What is, on the one hand, a game-changing crime-fighting tool, is also, on the other hand, a privacy overreach of near-existential proportion to innocents. License plate readers, which can capture around 2,000 plates a minute, cast a privacy-trampling wide net that has made it far easier for cops to catch serious criminals. But that requires the real-time collection, along with the storage of the data of innocents by authorities for later data mining and is highly alarming to privacy advocates.

“License plate readers are inherently a form of mass surveillance,” investigative researcher Dave Maass of the nonprofit Electronic Frontier Foundation told Quartz. “You look at something like a wiretap and most of the time it’s looking for a specific person and capturing specific conversations with that person. But here they are collecting information on everybody, not all of whom have been accused of a crime, in case they may one day commit a crime. This is un-American.”