GOP Senator: China Should “Pay Damages” For The Coronavirus 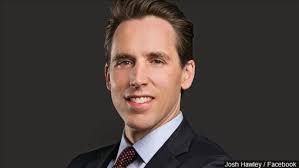 A GOP senator is saying that the Chinese government should pay the United States government for “damages” caused by the coronavirus.

But the sad truth is, the U.S. response and the governors of individual states have already done far more damage to the country than this virus could ever have hoped. Yes, people have lost their lives because they were infected, but far more are going to lose their lives to suicide or worse as their livelihoods have now vanished in the wake of shutting down the entire economy.  The future death toll from the fallout of the shutting down the economy will dwarf whatever the actual deaths from this virus will be and that’s the real tragedy. As Thomas Sowell said, “There are no solutions. There are only trade-offs.”

The text of Senator Josh Hawley’s resolution, which was introduced with a companion resolution in the House from Rep. Elise Stefanik, a New York Republican, calls for the United States and other nations to “design a mechanism for delivering compensation” for the coronavirus outbreak. The resolution does not specify how much money the Chinese government should pay.

It can also be guaranteed that the Americans who lost businesses thanks to the government’s tyrannical and authoritarian overreaction won’t see one penny of the compensation, and that’s IF the government can even force China to somehow pay. Hawley says China should pay though because they lied to the entire world about where the coronavirus came from.

“The CCP (Chinese Communist Party) was aware of the reality of the virus as early as December but ordered laboratories to destroy samples and forced doctors to keep silent. It is time for an international investigation into the role their cover-up played in the spread of this devastating pandemic. The CCP must be held to account for what the world is now suffering,” he said.

Also on Tuesday, Florida Rep. Matt Gaetz introduced the “No CHINA Act,” legislation that would ensure no money appropriated by Congress in fiscal 2020, including relief funds used to prop up American businesses reeling from quarantine orders, goes toward supporting China.

Hawley, Gaetz, and other lawmakers have criticized the Chinese Communist Party for stifling whistleblowers and for not responding more quickly and transparently when it first learned about the highly contagious, flu-like disease late last year. President Trump has repeatedly referred to the disease as the “Chinese virus,” placing blame for its spread on China, where the coronavirus is widely believed to have originated.

In recent weeks, Chinese officials have accused the U.S. military of planting the virus in Wuhan, China, which has earned stern rebukes from U.S. officials. –Washington Examiner

U.S. markets have plummeted since the start of the outbreak, and businesses have been shut down across the country to stop to spread of the virus. An official at the Federal Reserve estimated that unemployment in the U.S. could hit 30% because of the United States government’s response to the pandemic.  Some businesses that have closed will never reopen.  A large portion of our society has lost their livelihood and their standard of living is about to tank because of it. That isn’t the fault of the Chinese government, but the U.S. government.

Toilet paper is slowly showing up at online retailers, however, most areas are still reporting shortages at their local brick and mortar stores. Begin to prepare now for an economic crisis, because it’s going to be difficult to avoid one at this point. You can stock up on toilet paper to prevent from running out when the masses panic next time as well. Another good suggestion is the bidet.  Save your toilet paper to barter with.

Preppers Were Right All Along: Food Is Being Wiped Out Desperation May Soon Set In