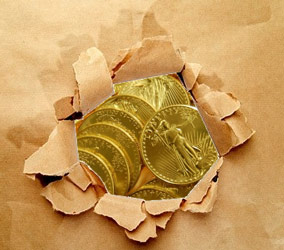 We’ve seen some significant swings in precious metals over the last several years and if we are to believe the paper spot prices and recent value of mining shares, one would think that gold and silver are on their last leg. Last weekend precious metals took a massive hit to the downside, sending shock waves throughout the industry. But was the move really representative of what’s happening in precious metals markets around the world? Or, is there an effort by large financial institutions to keep prices suppressed? In an open letter to the Commodity Futures Trading Commission First Mining Finance CEO Keith Neumeyer argues that real producers and consumers don’t appear to be represented by the purported billion dollar moves on paper trading exchanges.

With China recently revealing that they have added some 600 tons of gold to their stockpiles and the U.S. mint having suspended sales of Silver Eagles due to extremely high demand in early July, how is it possible that prices are crashing?

As noted in Mike Gleason’s Weekly Market Wrap at Money Metals Exchange, while it appears that gold is currently one of the world’s most hated assets, the retail public continues to buy at a record pace:

The U.S. Mint has sold over 100,000 ounces of American Eagle gold coins so far in July. That’s the highest monthly demand volume registered since April 2013. And that’s just as of this week. There’s still another week left to go before the final sales tally for Gold Eagles comes in for the month of July. It could be one for the record books with 109,000 1-ounce Gold Eagles sold — with bargain hunters purchasing 6% of the U.S. Mint’s production from Money Metals Exchange.

It’s not clear exactly who is suppressing precious metals or why, but it is quite apparent that prices on paper exchanges are completely disconnected from reality, as retail buyers are taking this opportunity to scoop up gold and silver at prices that are 50% or more off their highs.

But what happens next? That, of course, is anybody’s guess, but considering current prices and movements within the context of a broader economic crisis, there is a precedent for what we have seen in recent years.

We need only look back to the recession of the 1970’s. 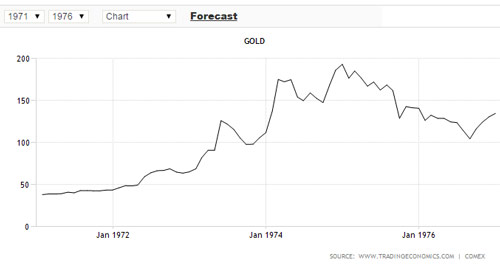 You’ll notice that gold saw some significant price movements, not dissimilar to what we’re experiencing today. There were several down swings of 25% or more within the broader gold bull market. Most notably, take a look at what happened from 1975 to 1976. Gold shot up to nearly $200 an ounce, only to be pounded just twelve months later by 50% to a price of just over $100 an ounce.

As the crisis accelerated in severity into the late 1970’s, complete with gas shortages, job losses and geopolitical tensions, we saw gold explode in value to a high of $850 by January of 1980.

We’re not necessarily suggesting that gold will follow the exact same pattern. But history does rhyme, and the world again finds itself in serious financial, economic, and monetary crisis. As we’ve noted before, gold is and always has been the historical asset of last resort for preserving wealth. Should the current crisis accelerate as we saw in the 1970’s, the value of gold will likely rise accordingly. We may not be looking at a 700% increase in price like we did from 1976 to 1980, but there is a distinct possibility that we will witness serious gains in real value as crisis and panic unfold.

You can’t eat gold and silver, of course. If crisis is coming we have always urged our readers to prepare themselves for disruption to credit-dependent commerce systems with reserves of food, emergency cash and other supplies. But having a physical asset with real monetary and barterable value in your possession is certainly an important strategic consideration going forward.

Though past performance is not necessarily an indicator of future results, we have over 6,000 years of history backing gold’s legitimacy as a true mechanism of exchange.