Gold does not directly correlate with the dollar. This couple has ceased from trading inversely to each other for many years. It’s very common to see a strong dollar and a strong gold rally, as well as a weak dollar (like right now) along with a weakening gold price (like right now). So, if the dollar isn’t the leading indicator for future gold prices, then what is?

The answer isn’t government debt either; the federal deficit and the national debt pile are contributors to the macro case for owning and storing precious metals, but the debt rises by the second, so if that were the case, gold would always go up.

It’s not inflation either; there’s inflation in the system inherently. Our global economy keeps adding more currency to circulation with each passing year and gold has been rising at more than a 1.6% pace, which is what the Federal Reserve cites as its gauge for CPI (Consumer Price Index).

Inflation and gold correlate much more once inflation becomes a noticeable issue, which any person can see and recognize. The truth is that the average American not only does not know how to define the term monetary inflation, he also has no idea what the consumer price index is – which means that inflation isn’t a hot topic, mentioned daily by influential figures. 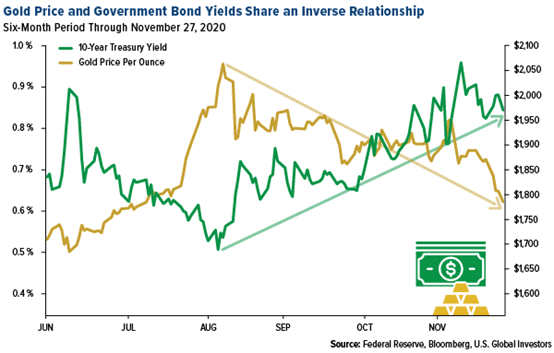 This, as you can see, is an inverse correlation at its best. Bond yields, especially real yields, are the best barometer for where gold is headed next. Real yields are the result of discounting CPI from the nominal 10-yr bond yield.

Right now, the 10-yr bond is 0.84%. Because inflation is higher than that in the United States, there are negative yields, when accounting for real life. If one lends the government $100,000 for a decade, receiving 0.84%/annum, while his purchasing power erodes by more than that, he’s actually banking a guaranteed loss.

In that type of world, one is incentivized to allocate a portion of his savings towards precious metals, since bonds don’t offer much of an alternative to cash.

But, if the sentiment on the street is that this trend is reversing – which means rates are headed higher, while inflation stays tame, causing negative rates to disappear – the reason to own gold, as a trade, goes away.

This is what’s happening right now: Wall Street is convinced that rates bottomed in March and after six months of recovering from the initial shock, lenders have more options to choose from, so they’ll demand higher rates from the U.S. government. 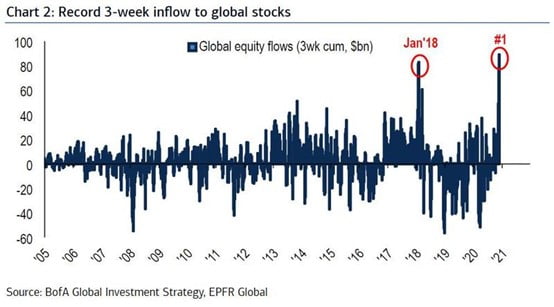 We do not anticipate inflation remaining the same as today. In fact, with the latest reporting about oil prices in 2021, it seems that the street doesn’t either.

On top of that, as you can see above, the markets are euphoric, with valuations resembling Dot.Com era levels. Right after it burst, gold bottomed and then soared for eleven consecutive years.

That’s not what we’re envisioning, but if stocks peak soon and trade sideways for a number of months, gold could do well, as money rotates toward it.

The point is that this slump could be based on a totally false narrative.

So, what we’re doing is building our watchlist and waiting for the SWING, which will occur the moment the trend reverses.