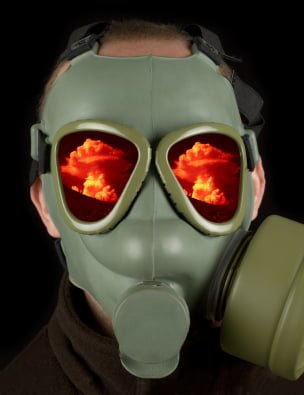 There is yet more confirmation that near-certain doom is headed for planet earth, and could kill or disrupt the lives of everyone on the planet.

And there’s reason to think it could be in our lifetimes.

And yet we’re the conspiracy theorists…

According to the Daily Mail/Press Association:

In the next five years asteroids, super volcanic eruptions and unknown risks are ranked as the biggest threat to humanity.[…]

It may sound like the stuff of sci-fi films, but experts said these apocalyptic threats are more likely than many realise…

In the longer term, the rise of artificial intelligence (AI) has been listed alongside catastrophic climate change, nuclear war and pandemics as a threat to humanity.

The biggest long term threat to civilization is natural and engineered pandemics and nuclear war […] the rise of synthetic biology could open the door to the creation of “off the shelf” deadly viruses.

The report, which focuses on global approaches to address these looming dangers, and a worldwide integration of efforts, reminds us that we are all too mortal, and that devastating pandemics have indeed occurred throughout history:

It warns that while most generations never experience a catastrophe, they are far from fanciful, as the bouts of plague and the 1918 Spanish flu that wiped out millions illustrated.

There is no way of knowing what kind disaster could befall the planet, but it is important to prepare for the worst at a personal and local level. Chances are, you’ll be far more effective that way.

Despite the focus on global talk, there is little chance that a bigger and bigger governing structure could protect us all, or come to the rescue when you need it most.

When seconds count, police are minutes away, and the federal/international authorities are days or weeks away. They are only there to clean up the mess when it’s over and seize power.

Indeed, it seems that civilization is all-too-vulnerable, and millions of lives hang in the balance. Don’t be complacent, don’t rely on big cities and trust only those who you know and can rely upon.

The Prepper’s Blueprint: Your Step-by-Step Guide to Prepare for Any Disaster

The Shaking Continues: “There is Great Reason For Concern” Over Recent Earthquakes and Volcanic Eruptions