Giving Food to the Homeless Shouldn’t Be a Crime 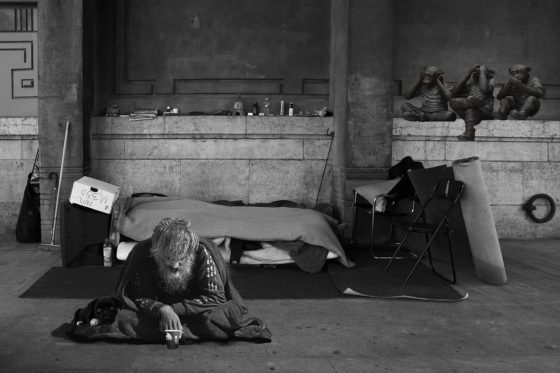 Government has long been characterized as inept. It’s easy to forget that sometimes it can be downright cruel.

The latest example comes from Missouri, where the Kansas City Health Department is under fire after employees bleached food intended for the homeless because the people supplying it did not have the proper permit.

On Sunday, officials from the health department, accompanied by armed police officers, stopped volunteers with Free Hot Soup Kansas City from feeding the homeless at four locations, claiming the food had not been inspected.

“Officers and health inspectors demanded we destroy our food and we were violating health code violations by sharing meals with our friends,” said Nellie McCool, who has participated in efforts to feed the homeless for years.

The health department has defended its crackdown, claiming officials had previously informed the volunteer group that they needed to obtain a permit.

“They were notified back in a meeting in September that they needed to get a permit, and they just outright said they refused to do that,” said Dr. Rex Archer, Director Of Health for KCMO, according to KSHB, a local Kansas City outlet.

McCool denies this. “We never had any kind of government official ever come and speak with anybody at any of the public parks,” she said.

Regardless, according to the department’s write-up of the Sunday incident, officials destroyed the food, citing the lack of a permit, and insisted the action was taken to protect public safety.

In a tweet elaborating on the agency’s position, officials claimed they blocked the volunteers because their gatherings are “open to the general public,” and the food is not stored at the “required temperature for food safety” when it is transported to serving locations throughout the city.

McCool claims that Free Hot Soup Kansas City should be exempt from the regulations, arguing that they are not an official organization and were simply sharing food with friends in a picnic-like manner.

“As far as I know, picnics are not regulated by the same laws as organizations and vendors, so by using our public parks to have a picnic with our friends, I don’t believe we were breaking any rules,” she told local outlet KCUR. Archer disputed her position. “If it’s a family picnic, it’s for the family, and it’s at one location. So it was pretty clear that this was an operation that was operating illegally,” he said.

McCool believes government officials disapprove of their efforts and have sought “to bully [them] into becoming an organization.”

Hurting Those Who Need Help Most

It seems counter to the basic tenets of liberty for a government entity to assert it can restrict others from engaging in acts of charity—or receiving it—because there may be a risk involved. Freedom involves risk, and when people are living on the streets, it seems reasonable to assume they might like the option to take their chances on food donated to them.

Though this incident has sparked heated debate in Kansas City, it is hardly unique. Local governments nationwide have been restricting well-meaning citizens from feeding the homeless for years.

In 2014, a 90-year-old veteran in Fort Lauderdale, Florida, was cited and arrested multiple times for feeding the homeless without a permit in an ongoing ordeal that ultimately led a circuit court to temporarily halt the policy. Earlier this year in San Diego, California, a group of activists was arrested for the same offense. Following Hurricane Michael, a viral video circulated of health department officials in Panama City, Florida, apparently shutting down food donations because those distributing it, once again, did not obtain the proper permitting from the health department. (The Florida Department of Health in Bay County did not return FEE’s email seeking to confirm the video’s authenticity.)

In a positive development, the Supreme Court ruled in August that feeding the homeless is protected under the First Amendment after Fort Lauderdale activists sued over the city’s permit requirement.

At a broader level, however, similar nanny state measures have produced everything from regulations restricting what types of beverages can be listed on children’s restaurant menus to banning people from feeding pigeons. Violations of such rules come with hefty fines and even jail time.

Restrictions against feeding the homeless, and in multiple cases outright destroying what is likely perfectly safe food, seem particularly misguided and harmful, as do measures preventing Good Samaritans from providing them with shelter.

As is so often the case with intrusive government policy, those most in need end up the victims. “[G]rown men and women [were] crying as they watched good, hot food made with so much love be destroyed right in front of them,” one of Free Hot Soup’s administrators said of the incident.

Carey Wedler is a video blogger and Senior Editor for Anti-Media.