Ghost Gunner 3D Printer: Legally Make Your Own Rifle At Home: “No Serial Number, No Background Check, And No Waiting Period” 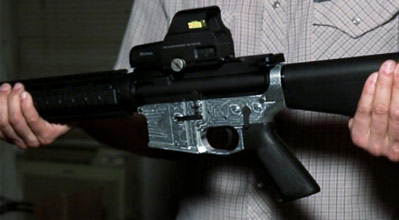 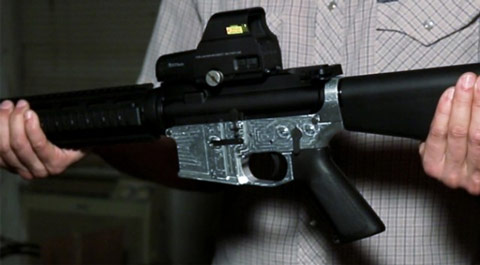 As the government feverishly attempts to restrict everything from the importation of ammunition to ownership of semi-automatic weapons, one individual has been tirelessly working to restore the spirit of the Second Amendment to all corners of America.

Cody Wilson, who in 2013 developed the first ever 3-D printed plastic gun known as The Liberator, is at it again. But this time he’s taking open source firearm manufacturing to a whole other level.

Earlier models of his home printed firearms were dependent on plastic parts. They worked, albeit only a few times before they shattered because of the extreme pressures involved with firing a bullet out of a gun. Even the heaviest duty plastics eventually weakened to the point of failure.

But the world of 3-D printing and private gun ownership is about to change dramatically. This holiday season Wilson’s company Defense Distributed will be releasing the first ever 3-D printer designed specifically for the manufacture of firearms.

The Ghost Gunner is named after the “ghost gun,” a firearms industry name for a weapon that can’t be traced. Once instructions are sent to the one foot cube, the machine is capable of milling the one component of a gun that makes it a gun: the lower receiver. It’s also the part of the gun that you cannot legally buy in most states without the government knowing about it because it must have a serial number. And what makes Ghost Gunner different from previous attempts at printing firearms is that this one “prints” with metal, not plastic.

It’s about to get a whole lot easier to make a semi-automatic rifle at home with no serial number, no background check, and no waiting period.

Cody Wilson, the libertarian behind the world’s first 3D-printed gun, is now selling an all-in-one desktop CNC mill, called the Ghost Gunner. It can produce an aluminum lower receiver of an AR-15 rifle — the civilian version of the military’s M-16 assault rifle — in a couple of hours.

The lower receiver, which connects the stock, barrel, magazine, and other parts of the gun together, is the component that is legally considered to be a firearm under US law — and its sale is highly regulated. The Ghost Gunner is programmed to take a partially-complete lower receiver, known as an “80 percent lower,” and automatically mill it into a functioning part. From there, all you have to do is buy the other widely-available components online and assemble the rifle. As Wilson explains on the product’s website, “on day one, Ghost Gunner can help you legally manufacture unserialized firearms in the comfort of your own home.”

The Ghost Gunner ‘prints’ AR-15 receivers and will soon be capable of AR-10 and .308 printing: 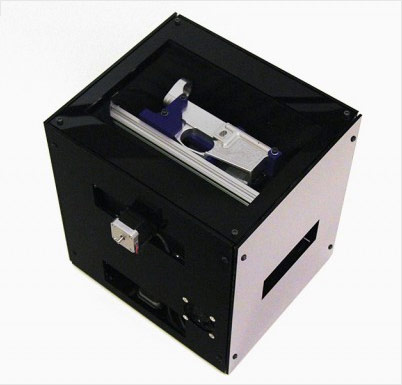 The Ghost Gunner will begin shipping during the 2014 holiday season. If you haven’t already pre-ordered your printer, you’ll have to wait until the next time around because their first limited run of 500 units at a price tag of $1200 have already sold out.

In 2013, when Wilson released the 38 caliber 3-D printed Liberator handgun, anti-gun advocate Senator Chuck Schumer of New York called it a “stomach churning” development that “must be stopped.”

A few days after Wilson’s video demonstration of the first ever plastic firearm went viral and over 50,000 people downloaded the open source plans, Federal authorities swooped in and shut down the operation claiming that the free release of the plans violated the Arms Export Control Act.

It’s not clear what, if anything, Federal, State or local authorities will do now that 3D printing gives the average person without advanced firearms machining skills the ability to print the essential component to an AR-15 without having to inform government regulators.

Here’s what Wilson’s Defense Distributed has to say about the legalities of printing your own guns:

In general, yes. Semi-automatic firearms, including the AR-15 lower receivers, are generally legal to manufacture for private individuals per US federal law Title 18 do not require serialization or other maker’s marks. However, some states/municipalities restrict either the manufacture of certain firearms, or, more recently, the personal manufacture of a firearm with a 3D printer and/or CNC machine. DD makes no claim regarding local manufacturing legality; lower receiver files provided by Defense Distributed might require special licensing to manufacture and/or possess.

Under federal law, manufacturing a firearm for contemplation of future sale without an FFL is prohibited. Without a manufacturing FFL, you should manufacture firearms for personal use only.

So, it would essentially take an act of Congress and perhaps even a complete re-writing of the U.S. Constitution to make the manufacture of firearms for personal use with the Ghost Gunner illegal.

We’re sure there are those in government who will make it their mission to shut Defense Distributed down once again. But 500 Ghost Gunner units have already been sold and more are slated to ship in 2015. Plus, they take Bitcoin, so the Libertarian-minded Wilson could easily take payments for the printer anonymously and destroy all records about his customers, making it impossible for the government to know who bought what.

Wiki Weapons, it seems, are here to stay.