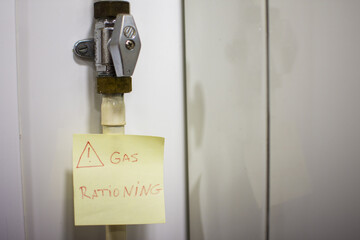 Energy rationing has begun in Germany.  The country is now implementing strict energy rationing as it desperately tries to avoid severe energy shortages this winter.

The country’s natural gas storage capacity is 67 percent full, making it slightly ahead of its target to fill its stores by 65 percent before September 1. The main objective is to fill gas stores up to 95 percent capacity by November 1, a goal that will prove to be a very difficult one to achieve.

German officials are hoping that renewed and harsher rationing efforts will help reduce the risk of energy shortages as Europe’s energy disputes with Russia appear to have no end. Many ministers are also very concerned about the possibility of heightened public unrest and gas riots should people be left unable to heat their homes.

The masters already warned the slaves previously that they intended to ration and highly regulate energy usage.

The government is also overriding contract clauses mandating that landlords keep their properties heated to a certain level to ensure the well-being of their tenants. These clauses are to be suspended for six months, with government ministers claiming that this will allow renters who are willing to voluntarily turn down their thermostats to do so.

By September 1, German policies imposing limits on how warm public buildings and offices can be will go into effect. These places will be legally restricted to temperatures of no higher than 19 degrees Celsius (66.2 degrees Fahrenheit).

Public buildings will also no longer be allowed to keep their hallways heated, with exceptions for critical institutions like hospitals. The government is also banning heating tap water for washing hands using boilers or instant heating devices. -Natural News

These are not the only measures that Germany intends to implement either. The country will additionally ban public shops from leaving their doors open. Supplying energy to monuments for lighting will also be banned. Outdoor pools will be forbidden from being heated using gas or electricity, and neon signs must be switched off by 10 p.m.

The German Association of Towns and Municipalities said this week that local authorities were not in a position to check compliance on the likes of businesses. Meaning, that people should just obey and comply, The association’s chief executive, Gerd Landsberg, told German daily Bild that it would “not be possible,” to check whether store doors are closed around the clock, according to the Local.

“We will not be able to check whether doors are always closed around the clock,” said Landsberg. He added that despite the rules mandating the implementation of these energy rationing policies, local authorities will be forced to use their “common sense” to decide whether or not to clamp down on energy usage.