George Soros: Society “May Not Survive” The Russian Conflict 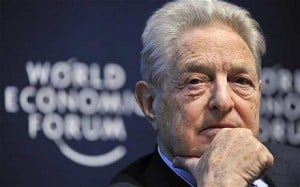 George Soros delivered a speech on Tuesday to attendees at the 2022 World Economic Forum in Davos, Switzerland that said society “may not survive” the conflict between Russia and Ukraine. “Even when the fighting stops, as it eventually must, the situation will never revert” to where it was before, warned the 91-year-old Soros.

According to Soros, Russia’s invasion of Ukraine may have marked the start of “a third world war,” and Russian President Vladimir Putin must be defeated “as soon as possible” if the world wants to preserve civilization. “Other issues that concern all of humanity — fighting pandemics and climate change, avoiding nuclear war, maintaining global institutions — have had to take a back seat to that struggle. That’s why I say civilization may not survive,” Soros said according to a report by CNN.

Speaking about Putin and China’s leader Xi Jinping, Soros said: “They rule by intimidation, and as a consequence they make mind-boggling mistakes.”

He pointed to China and Russia as the greatest threats to open societies aided by the development of digital technologies and especially artificial intelligence. “In theory, AI ought to be politically neutral — it can be used for good or bad. But in practice the effect has been asymmetric. It is particularly good at creating instruments of control that help repressive regimes and endanger open society,” Soros said. –CNN.

As if anyone on this planet is living in an “open society.” If you live under any form of government, you are a slave. Government is slavery, nothing more, nothing less.  Voting for a master once in a term of years doesn’t change that.

Societal collapse is coming no matter what. People are simply tired of being ruled and controlled. Once a critical mass of the human race figures out that they have been living under an illusion of freedom since government was created, we can take steps to actually be free.