Fw: Is the GREATEST CRASH Ever COMING?

In 2008, when the markets plunged by 47%, central banks and the government HAD A CHOICE: allow debts and companies to run the normal course of bankruptcy or INFLATE AWAY by intervening in the process. The decision to bail out the financial system’s most powerful corporations, which were the banks, PAVED THE WAY for the unprecedented COVID-19 response and the way interest rates operate globally in 2020.

The Federal Reserve is an institution that COLLECTS DATA from innumerable sources and makes analytical decisions based on its lawful mandate and risk tolerance.

Failure to act in the Great Depression of 1929 has played a major role in the thought processes of FED chairmen over the decades.

A lack of adequate response in 1929 is what historians blame the central bank for. When there’s a monetary system that pegs gold ounces to the supply of government currency, public trust is measured by their ability to convert notes to precious metals. When there’s a STRICTLY CREDIT system in place, as we have right now, gold is marginalized in the eyes of the public.

Only 0.5% of global wealth is held in gold; most don’t care to learn about it and some EVEN SCORN it as a thing of the past, yet it is trading near all-time highs and has been a TOP-TIER performer in the 21st century.

In our opinion, gold is becoming LESS VOLATILE and more of a MUST-OWN asset since the ETFs have made it a thing of comfort to have exposure to.

In my networking group, which I highly respect, we had the following question raised in light of the comparisons made by the CHART BELOW between 2020 and 1929: 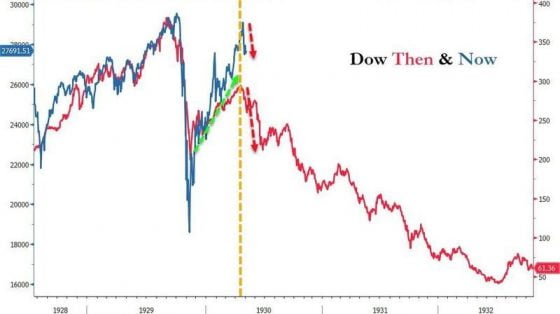 The question: Is the GREATEST CRASH on record coming?

We’ve gathered answers from billionaires and money managers who are MARKET VETERANS, along with large hedge fund managers. The result? NO MARKET CRASH is predicted!

I want to go over the reasons behind this since many feel like THE EARTH IS SHAKING beneath them and they’ve been living under that premise for years!

The Internet is FILLED WITH forecasts of doom, -80% wealth destructions and the worst economic conditions in modern history, all based on the chart below of the UNSUSTAINABLE NATIONAL DEBT. 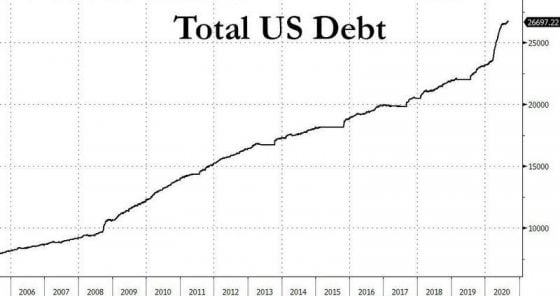 Many people can’t sleep at night, worrying about the DEBT LOAD of the federal government, so I’d like to DECONSTRUCT this threat and bring it down to the level of the individual.

The United States’ GDP isn’t growing as fast as its debts are, so the ratio between productivity and debt issuance is GETTING SMALLER, which is to say that it is unsustainable.

Is there a connection between this and the markets? NOT REALLY…

As you can see, total debt is ALWAYS GROWING (since 1971, that is), and even the feared DEBT/GDP ratio is growing along with it, yet because of zero interest rates, it’s actually VERY EASY to pay the interest on the debt, which is what the government does. On top of that, many of the LARGEST EXPENSES are social entitlements, so it can be argued that cutting back on those will MATERIALLY EASE the debt burden, though I can’t say that there’s political will to entice the baby boomers just yet.

The bottom line is that (1) companies are innovating LEFT AND RIGHT, which is what is moving the world forward, and (2) interest rates are so low that owning equities is ONE’S ONLY CHOICE!

Instead of thinking of a market crash, think about the RECORD-HIGH wealth gap!

This is really what the world has to fear because it drives social unrest and PERPETUATES POVERTY. The fact that there is NO CRASH is what makes poverty linger; the people at the bottom of the food chain don’t get to capitalize on the wealthy’s mistakes.