Futurist’s Prediction: Cyborgs Will Rise As “Our Supremacy…Is Rapidly Coming To An End” 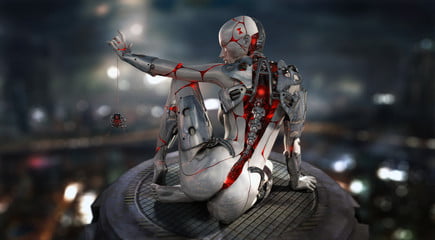 When British futurist James Lovelock looks to the future, his vision for humanity is grim. He doesn’t foresee humans ruling the Earth.  Instead, he believes cyborgs will rise up and end humanity’s supremacy as “prime understanders of the cosmos.”

Lovelock believes we are already living in the early stages of what he calls the Novacene, an era in which self-sufficient cyborgs, vastly more intelligent than today’s humans, will dominate the Earth. “The crucial step that started the Novacene was, I think, the need to use computers to design and make themselves,” he wrote in the book. “It now seems probable that a new form of intelligent life will emerge from an artificially intelligent precursor made by one of us, perhaps from something like AlphaZero.”

Lovelock told NBC News that the cyborgs could eventually modify the Earth to suit themselves, making humans extinct.  However, Lovelock doesn’t think the cyborgs will actively attempt to destroy the human race. In fact, he believes we’ll be so inferior to Earth’s new dominant species that they’ll view us the same way we currently view plants.

It is an interestingly dystopian view of the future.

In the Novacene: The Coming Age of Hyperintelligence, new beings will emerge from existing artificial intelligence systems. They will think 10,000 times faster than we do and they will regard us as we now regard plants. But this will not be the cruel, violent machine takeover of the planet imagined by science fiction. These hyperintelligent beings will be as dependent on the health of the planet as we are. They will need the planetary cooling system of Gaia to defend them from the increasing heat of the sun as much as we do. And Gaia depends on organic life. We will be partners in this project.