Preparedness planning involves not just planning for unforeseen events, but maintaining an ongoing vigilance and awareness of what is happening around us. Economic collapse, war in the middle east, and food shortages are just some of the current events that should be on the radar of anyone who is concerned with preserving their personal well being. And while these particular scenarios could lead to serious consequences if they come to pass, the one that seems to be on the minds of everyone and not just preppers these days, is the BP Deepwater Horizon rig disaster.

Within a couple of weeks of the rig explosion we published a report that suggested that the disaster was much bigger than we were being told. Within a month of the disaster, we learned that the National Guard was mobilizing in several states, and we opined that the military may be preparing for deployment to the Gulf region. As of this writing, it is our understanding that over 17,000 National Guard soldiers have been deployed to provide support to local emergency personnel.

With BP, the government and most of mainstream media engaging in what can only be dubbed a media blackout and suspension of the first amendment, the skeptical public is beginning to understand that the powers that be must be hiding something really big down there.

George Noory, of Coast to Coast AM, says that “something frightening is happening” and briefly discusses one of the more serious and scientifically plausible scenarios citing a recent report by Terrence Aym:

Terrence Aym’s report discusses the plausibility of doomsday disaster scenario resulting from a methane gas explosion, which could lead to rapidly expanding toxic gas in the air, and in a worst-case, the possibility of a tidal wave that would wreck havoc on the entire gulf coast.

How likely is such a scenario? Unfortunately, it is not as unlikely is we’d like it to be, and according to recent reports from around the spill area, it could become reality. Aym’s research says that the warning signs are evident:

The warning signs of an impending planetary catastropheâ€”of such great magnitude that the human mind has difficulty grasping it-would be the appearance of large fissures or rifts splitting open the ocean floor, a rise in the elevation of the seabed, and the massive venting of methane and other gases into the surrounding water.

Such occurrences can lead to the rupture of the methane bubble containmentâ€”it can then permit the methane to breach the subterranean depths and undergo an explosive decompression as it catapults into the Gulf waters.

All three warning signs are documented to be occurring in the Gulf.

We know that researchers have measured extremely high levels of methane, reportedly over 10,000 times background levels in gulf waters.Â  And Though there are deniers, we’ve also seen with our own eyes that oil is leaking through the sea-floor, so the cracks Aym speaks of are most definitely there. According to Senator Bill Nelson (D-FL), there is a serious possibility that we have multiple cracks across the area, with some reports suggesting that leaks are up to twenty miles away from the primary well. All are leaking oil and the concern is that a relief well will not block all the seepage. How much more widespread these cracks are will likely remain a state secret, because it seems that the last thing BP or our government want is to tell the people the truth so that they can make educated decisions on whether to stay in the area or get out while they still can.

Project Avalon’s Bill Ryan and Dr. Bill Deagle provide an informative discussion related to this issue, complete with helpful images about the BP dig site and how an 80 – 200 foot high Tsunami could result not just from a methane explosion, but a steam driven volcanic eruption. So we have two independent scenarios that could lead to a catastrophic tidal wave heading toward gulf coast cities in a worst-case scenario.

Some key points from the video above:

Right now there are something like 79 exercises going on, state and federal, with a number of exercises by FEMA for mass evacuations from Brownsville, TX to Pensacola, FL. So, they’ve been getting ready for the last month. And they have been doing operational exercises on the massive oil spill even over the last several years, and all the places where those oil spill data have been posted on web sites have been scrubbed in the last 60 days. So they removed all the evidence that they were doing previous massive evacuations for oil spill disasters.

Scientists have contacted me now and others are alerting me inside the government that both FEMA and Homeland Security are very concerned that their scientists are telling them there’s a danger of a volcanic Tsunami occurring. That means when the oil at some point, that if enough oil comes out and seawater gets down there and it gets below the zone where the oil is and makes contact with the magma which is pushing up the oil, then we’re likely to see a super heated steam which is what drives all those volcanoes along those subduction zones…

It’s likely to cause a giant explosion with the change in the ocean floor and a Tsunami that they estimate could between 80 to 200 feet high going four to six hundred miles an hour. It could carry 50 to 100 miles inland. 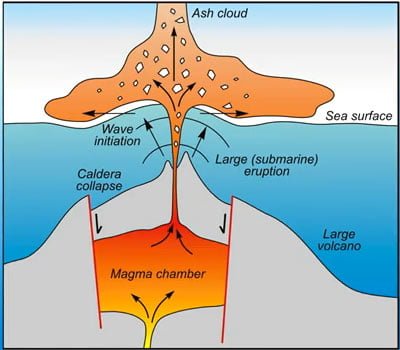 There’s hundreds of millions of tons of methane hydrates. Hundreds of millions of tons. It’s all frozen, but what happens is that it doesn’t need oxygen because of the actual chemistry down there. Some of the things they’re doing could ignite the methane hydrates and cause itself, without these other events like the volcanic Tsunami, could cause also a Tsunami. So we have two possible mechanisms that could cause a Tsunami and push oil and debris and boats and oil rigs. This is the other danger. It could destroy 40% plus of the production rigs in the United States and kill millions of people.

We, of course, have no official information to go off of, but scientists suggest we may be running out of time:

While some say it canâ€™t happen because the bulk of the methane is frozen into crystalline form, others point out that the underground methane sea is gradually melting from the nearby surging oil thatâ€™s estimated to be as hot as 500 degrees Fahrenheit.

Most experts in the know, however, agree that if the world-changing event does occur it will happen suddenly and within the next 6 months.

Whether this is what the government is hiding or not is mere speculation at this point. However, we have been given no reason to summarily disregard the research of independent scientists, analysts and reporters that have been working on obtaining information and potential outcomes since the rig explosion occurred. Should we trust these people? Our view is that it can’t be any worse than trusting the government. In fact, since our government officials often engage in gamesmanship and focus more on their political survival than the physical survival of our countrymen, we would lean more towards independent analysis being the trustworthy source.

We are not scientists, so we’ll defer to those who know more than we do on this issue. As such, it is clear that a potential threat, perhaps a significant Doomsday threat exists here. Though we cannot predict the likelihood of events such as a steam-driven volcanic Tsunami or methane gas explosion, we must assume that they are a possibility.

If such an event were to occur, and a Tsunami or tidal wave up to 200 feet high were to head for US shores, there would be very little time to react.Â  Our guess would be that the survival rate for anyone in the direct path of a wave ranging from 80 to 200 feet would be quite low, especially if such a wave could wash in 50 – 100 miles in low lying areas like Florida.