Free Speech Silenced In Chicago: ‘Our Political Differences Can Be Settled By The Ballot Box Or The Cartridge Box’ 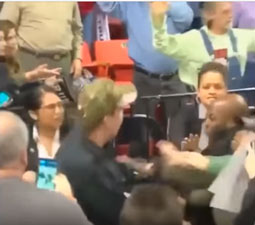 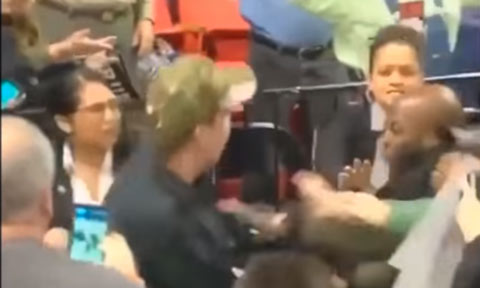 (Pictured: A fight breaks out at Trump rally in Chicago. Video below.)

Yesterday there was a protest while Trump was speaking in St. Louis, and then again in Chicago; the latter prompting Trump to cancel his campaign rally.

Trump did the right thing.  But folks, if you’re on the fence, or anything other than a supporter of both communism and terrorism, you cannot stand for what happened yesterday.

These people weren’t “protesting”, they were attempting to denying a man’s First Amendment right to speak by threatening violence.

In St. Louis this featured at least one man stomping a flag while wearing a “**** the police” t-shirt.

In Chicago there were many Mexican flags flown, including some being worn as clothing, among the crowd, panned across repeatedly on live TV. Therre were hoards of people who swarmed the parking garage, smashing car windows.  And who else was there, probably instigating it all?

Former leader of the Weather Underground (that’s a domestic terrorist organization that actually set off bombs at the Capitol, the Department of State and the Pentagon along with blowing up a statute in Chicago and committing arson in New York City) Bill Ayres.

I don’t care what your political proclivities are those who would deny someone their First Amendment right through the threat of violence are not protesters, they’re rioters and felons.

If you support this action in any way or try to blame Trump for the actions of these individuals as his competitors in the race have, then you’re unfit to govern, you’re unfit to vote and you are a fascist.

That includes both Kascish and Ted Cruz, both of whom tried to capitalize on Bill Ayres, Mexican nationalists waving their flags and myriad “Black Lives Matter” people at both protests wearing and/or shouting “**** the Police.”

Remember that if one man’s right to free speech can be silenced through the threat of violence so can anyone else’s — including yours.

Oh, and if you’re a user of Facebook or an advertiser on same and thus contributing to their bottom line?

They were one of the organizing points for these anti-American thugs and despite the facial violation of the First Amendment that was encouraged they have not deemed such a violation of their “community standards” and have done nothing to inhibit same.

Think about that long and hard folks, and then remember that Facebook investor Sean Parker was at the meeting less than a week ago to “stop Trump.”

We’re supposed to settle our differences in politics at the ballot box, which comes after we find that the soapbox is no longer sufficient to resolve what pains us.

If you no longer believe in using the ballot box to settle political differences you are declaring that you are an advocate of using the final means of handling such disputes, the cartridge box.

Any act in furtherance or support thereof is a declaration of war upon the Constitution itself.

Editor’s Note: Watch Raw footage of the purportedly “peaceful protest” in Chicago… Consider what the mainstream media would be saying if the situation were reversed and it was Hillary Clinton or Bernie Sanders who had to cancel a rally because of violent threats from “right wing extremists: