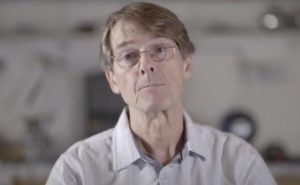 Dr. Michael Yeadon, a former vice president of big pharma company Pfizer, who is being hailed as a “conspiracy theorist” by the mainstream shared his latest take on the damning evidence about the mRNA COVID-19 “vaccines.” Dr. Yeadon says these shots are “toxic by design.”

Yeadon, like some of the rest of us, has yet to see sufficient evidence that this SARS-CoV-2 virus even exists.  If by some off chance it is something more than just a nasty seasonal flu, it still is not even close to being as deadly as the mainstream media and governments continue to claim it is. “It turns out that it’s not a particularly lethal virus, if it exists,” Yeadon stated during the symposium. “Or it’s about the same as a bad seasonal influenza.”

We all knew this. The only way anyone would even think there’s something out of the ordinary going on is because that’s what their television and smartphone told them.

According to a report by Natural News, Yeadon is warning people against taking these shots and wearing a face mask. Everything from the PCR tests to the masks to the idea of “asymptomatic spread” is fraudulent, Yeadon says. PCR tests “don’t tell you anything,” he says, and cloth masks “if anything, make you more likely to catch an unusual bacterial pneumonia because you’re breathing through a filthy cloth.”

As for the blue masks, these are nothing more than splash guards. Their purpose, Yeadon says, is “to stop blood and bodily fluid from going into the nose and mouth of the attending worker” at the hospital. “They’ve never been for filtering your breath, and they obviously don’t do so,” Yeadon says about the blue masks.-Natural News

Yeadon says, that these “vaccines” were “always going to harm people” because of the way they were designed. Not only is messenger RNA (mRNA) technology completely new and experimental, but the encoding that was done to have the shots target just the outside of the spike protein makes them exceptionally dangerous. “By choosing this design, the range of outcomes is probably 1,000 times worse than it would be for a conventional vaccine,” Yeadon says about the mRNA jabs.

Dr. Yeadon has tried to warn the masses since the beginning of this scamdemic.

Former Pfizer VP’s Warning: “Your Government Is Lying To You!”

The ultimate end game is a more enslaved planet where the ruling class will control literally every aspect of your daily life, complete with digital currency, microchips, and vaccine passports. If ever there has been a time to look beyond the illusion of freedom, it’s now.