Former Defense Minister: ‘You Have A Secret Cabal That’s Actually Running The World!’ 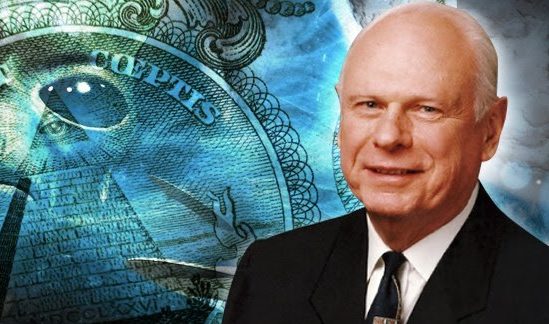 Paul Hellyer, a former Canadian Minister of Defense, is believed to be the highest-ranking former politician to come forward declaring the Illuminati as real. Not only does Hellyer state the Illuminati exist, but they are secretly running the world as the global elitists and will introduce the New World Order.

Remember, it’s only a conspiracy theory until it becomes a conspiracy fact. In a podcast, Hellyer, who was on post in the 1960s, said the Illuminati (at least at its most basic concept) was real and all powerful. He said corrupt hidden leaders continue to wage needless wars and focus on profits, rather than stopping climate change.  Although it has become evident to anyone paying attention that climate change is a fabricated tool of the NWO and global elitists, perhaps Hellyer is attempting to reach those who have no idea that their very existence is being controlled.

“This is something I’ve been following for quite some time,” said Joe Joseph of The Daily Sheeple. “But I want to share it with you because for all of you out there that believe that there’s a conspiracy to basically hijack all of our governments or they have been hijacked [already]…you’re absolutely right. And this should provide a little bit of validation for you.”

“I will say, that if you are fortunate enough to discuss with somebody that belongs to the CFR, the Council On Foreign Relations and they’re honest with you about things, then they will tell you straight out, that that organization runs the world,” Joseph says.

Hellyer claims the technology to reverse climate change has been developed, but it is suppressed by the Illuminati, as most of its key members have big stakes in the fossil fuel industry which they wish to continue for as long as possible. “You have got a secret cabal that’s actually running the world and they’ve managed to keep this technology under wraps until they can cash in the trillions of oil assets that they’ve got,” Hellyer said. “And it’s not going to change until hundreds of thousands of people band together and say look ‘you’ve got to come clean, tell us what is going on, and change your priorities to save the world for further generations instead of blowing it on wars’.”

But, that isn’t the goal of the NWO, and there’s a different, and in our humble opinion, a more logical explanation for the creation of climate change by the global elitists who will need a massive Earth depopulation in order to advance their agenda:

Hellyer also believes that several species of intelligent aliens are secretly living on Earth, and world leaders keep this secret from us, Dailystar.co.uk reports. He claims it is aliens that have developed a “free clean energy source” that can reverse climate change, that has been given to us – oh, like say…the free clean energy Nikola Tesla designed that was stolen so the elites can continue to make everyone else pay to live?

Max Loughan’s latest invention uses many of the principles posited by Nikola Tesla 75 years ago to harvest free energy from the atmosphere. Loughan’s invention uses an old coffee can, some coils of wire, and a spoon. It makes enough energy to light a string of LED lights wrapped around his twin brother Jack, much to the astonishment of a film crew from the TV station KTVN in Reno.

Putting two and two together is an extremely simple concept, yet most people still have trouble with it.  Chock it up to propaganda and not being taught to find the answer, but being “told” and indoctrinated.

“We are NOT being told the whole truth with regards to who’s visiting us, do we have power or do other lifeforms have power over us? Have they…all this kind of stuff,” Joseph says. “Now, I can tell you, from ancient texts, like the Bible, the Book of Enoch, to be specific, the ‘ones that from heaven to earth fell.’ You can go down to South America, you find these elongated skulls that don’t have human DNA.” So Joseph fails to understand why there’s “no evidence,” according to the mainstream media of a coverup or some type of conspiracy when the evidence is actually abundant.

“This is great that Mr. Hellyer has decided to go on the speaking circuit and talk about this,” Joseph says.