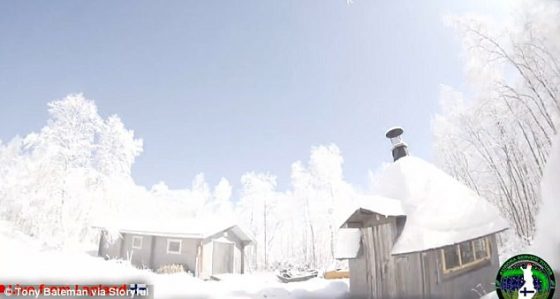 Stunning footage from Lapland, Finland has shown an incredible meteor slicing across the night sky.  The meteor was so bright that it lit up the sky with an awe-inspiring and noticeable blast.

“So tonight whilst I was sat in our cottage, there was a huge bang and the cottage shook violently,” Tony Bateman, who recorded one of the videos and runs the website Aurora Service Tours, said in the video description. “We run a live video stream capturing the night sky for aurora borealis purposes, I immediately think maybe that caught the show? So I rewind the video and sure enough, there it is. Absolute goosebumps at this stage. What. a. night.”

The footage is actually quite stunning.  The incident is thought to have happened at about 6:40 pm local time in the skies of Inari in Finnish Lapland. The incident was so bright and powerful that there were some reports it was even heard in Norway and Russia.

“The lights came from all around us, like a massive explosion that lasted for some five or six seconds,” eyewitness Atle Staaleen told the Barents Observer. While the event is impressive, meteors are actually not all that rare. Thousands of objects burn up in our atmosphere every year, but many are too small to be noticeable. Others take place over remote, uninhabited areas and are not caught on any recording device.

But this time, there was more than one camera which recorded this event.

According to IFL Science, on some occasions, a meteor will streak over a populated area. In the case of this incident, the meteor looks like it either exploded in the air as a bolide or hit Earth as a meteorite. As humans, we are getting better at tracking meteorites, but we’re not perfect yet. The often used example is the Chelyabinsk meteor over Russia in 2013, which went undetected but injured hundreds of people when it exploded.  There is also video footage of that meteor, and it included a very loud blast.