Florida Students Walk Out For The Right To Own Guns 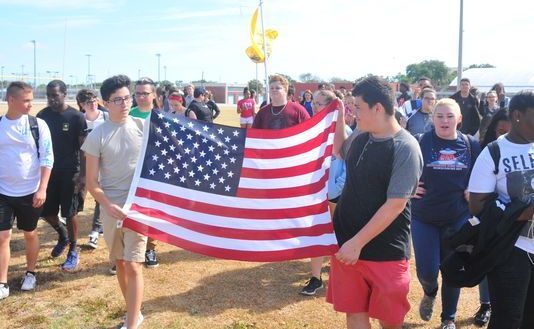 A group of students from Rockledge High School walked out of school Friday to support the human right to own guns. Approximately 75 students walked on the school’s track carrying an American flag in support of the basic right to self-defense.

According to a head count by school administrators and as reported by Florida Today, the students walked onto the school’s track carrying the American flag along with several signs that read “guns don’t kill people, people kill people” and “I support the right to bear arms.” The event lasted about 20 minutes and then students returned to their classes.

The gun rights march was organized by Chloe Deaton, a sophomore, and Anna Delaney, a junior, who are part of Rockledge High’s Criminal Justice and Legal Studies Academy. Deaton, while donning a T-shirt that read, “my rights don’t end where your feelings begin,” said the event was meant to clear up the misconceptions about the Second Amendment, not support or oppose any other particular political stances.  It also was a way for students to show that not all are in support of a government-approved opinion to take the rights away from the innocent.

The walkout comes just weeks after the National Student Walkout on March 14, when students from 2,800 schools across the United States walked out of class for 17 minutes to protest gun violence. That event came one month after the shooting at Parkland’s Marjory Stone Douglas High School that left 17 dead.

Deaton said it was important to make sure other students’ voices were heard. Some students who participated in Friday’s Second Amendment walkout wore camouflage clothing and President Trump’s “Make America Great Again” hats. They carried “don’t tread on me” flags and black-and-blue-striped American flags that are often used to show support for law enforcement.

“It’s all over the news right now that all students hate guns. I wanted to show that not all students feel that way,” said Zachary Schneider, a junior at Rockledge. “I finally got old enough to buy my own ammunition and my own guns, and I lost it again,” Schneider said, referring to the Marjory Stoneman Douglas High School Public Safety Act.