Finding a Vaccine for the Impeachment Derangement Virus 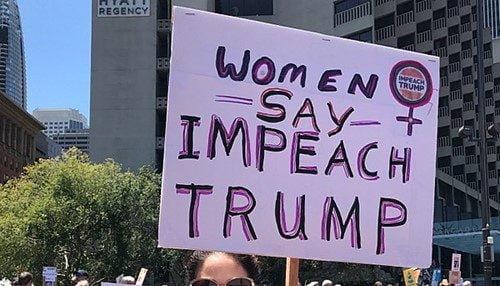 This article was originally published by Peter Van Buren at The Ron Paul Institute for Peace and Prosperity.

Once intelligent people are talking about actual civil war in America.  This began after Trump retweeted a pastor saying impeachment would cause a “civil war-like fracture in this Nation.” Never mind that it was a retweet, and never mind that the original statement used “like” to make a comparison. The next headline was set: Trump Threatens Civil War If He’s Impeached. Newsweek quoted a Harvard Law professor saying that the “threat” alone made Trump impeachable. Another headline asked: “If Trump’s Rage Brings Civil War, Where Will the Military Stand?”

Blowing up some online nonsense into a declaration of war tracks with the meme that Trump will refuse to leave office if defeated in 2020, or will declare himself the winner even if he loses, sending coded messages to armed minions. “Trump Is Going to Burn Down Everything and Everyone,” reads the headline from a NASDAQ-listed media outlet. “Before Trump will allow himself to be chased from the temple, he’ll bring it down,” wrote The New York Times.

That’s just what the MSM is saying; it gets worse the further off the road you drive. “Trump is going to try everything, Fox is going to try everything, and they’re going to both further the injuring of societal reality and inspire dangerous individuals to kill and maim,” Jared Yates Sexton, a well-known academic, tweeted on September 28. “There’s a vast number of people in this, people who have been taught their whole lives that they might need to kill in case of a coup or corrupt takeover,” he continued. “Trump and Republicans signal to them constantly. They’re more than ready to see this as the occasion.”

The idea that Americans are steps away from squaring off across the field at Gettysburg is something that should only exist in satire. It would be hilarious, except that such fantasizing is influencing the actual future of our country. We have crossed a line where rationality is in the rearview mirror.

Most of us have lost track of the constitutional crises that have never actually happened since the first one was declared, over the non-issue of Trump losing the popular vote in 2016. What was it last week? Sharpiegate? Or the hotel in Scotland? Or an impending war with Iran/North Korea/China? Or treason? Or something about security clearances? The Kurds were a thing in 2017 and again now. Paul Krugman of the New York Times first declared that Trump was going to destroy the economy in 2016, and has written the same article regularly ever since, most recently just last week. It doesn’t seem to matter that none of these things have actually proven to be true. Learned people are saying them again and again.

Those who oppose Trump have convinced themselves they must impeach for something, and if all of Russiagate (remember that? It’s like Aunt Edna’s brief failed marriage, only not mentioned at the dinner table) wasn’t enough, then Democrats will impeach over a phone call to a minor world leader.

It wasn’t supposed to be this way. The fantasy was to use Robert Mueller’s summer testimony about Trump being a literal Russian asset to stir up the masses—Mueller Time, Baby! Congress would go home for August recess to be bombarded by cries for impeachment, and then autumn would feature hearings and revelations amplified by the Blue Check harpies leading up to, well, something big.

Were rationality still in vogue, it would be hard to imagine that Democrats would consider the Ukraine call impeachable. But they closed out Russiagate like the OJ Simpson murder trial, certain Trump had gotten away with so much that they had to catch him at something else to make it even.