Ferguson Cops Expect Riots Whether Grand Jury Indicts or Not: “Preparing For All Worst-Case Scenarios” 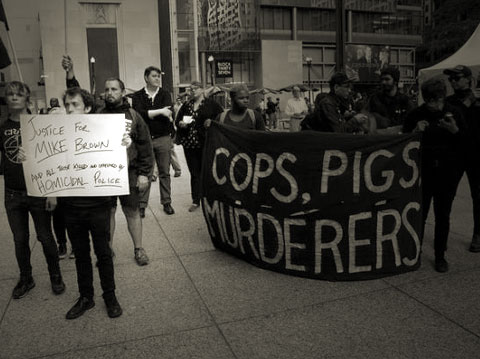 USA Today is pointing out the obvious – that anxiety over the grand jury’s yet-to-be released decision over the Ferguson shooting of Michael Brown is growing. A response is mounting to the potentially explosive news:

No matter what a grand jury decides in the case of a white Ferguson police officer who shot and killed an unarmed black teenager, people will take to the streets, whether in anger or celebration.

Ferguson Mayor James Knowles III has said he is preparing for “all worst-case scenarios” when the grand jury finally speaks. Police are gearing up for riots. Since August, police have spent more than $100,000 stocking up on body armor, tear gas, handcuffs and other crowd control items.

The [Don’t Shoot] coalition created a list of 19 demands they dubbed “rules of engagement,” including a plea to police to avoid using armored vehicles, tear gas, rubber bullets or rifles, and to don riot gear only as a last resort.

Police, however, are not ruling out riot gear in an area that has already seen violent protesters, and in turn, heavy handed tactics against protesters and members of the media.

Recently, hacktivists from Anonymous released leaked information claiming that Darren Wilson will NOT be indicted, and said that ‘virtually every local police agency as well as the National Guard and all local jails are on high alert,’ seemingly supporting the case for no charge and an uncivil public reaction:

On or about November 10, 2014 the Grand Jury decision will be announced. Darren Wilson will NOT be indicted on ANY charges related to the murder of Mike Brown. All local police Chiefs and jail commanders have been notified to begin preparing for major civil unrest. Governor Nixon has been notified of the impending announcement and has ordered the Missouri National Guard to begin preparations for a possible re-enstatement of the martial law that was declared at the beginning of the Ferguson protests.

If you thought all hell had already broken loose in Ferguson, get ready.