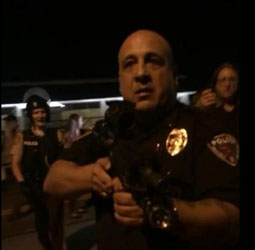 Editor’s note: If you were to aim your weapon at someone for no reason and threaten to kill them, how long would it be before police showed up at your door to arrest you? The problem with our system of “justice” is that law enforcement officials seem to be above the law, with no accountability whatsoever. Threaten, maim, or kill someone if you’re wearing a badge and chances are you’ll get off scot-free without so much as a citation for your conduct.

Until agents of the government who break the law start being carted off in handcuffs this behavior will continue… and likely get worse.

The following article has been contributed by Paul Joseph Watson of Infowars.

Shocking footage out of Ferguson, Missouri shows a police officer pointing his gun directly at protesters and press while remarking, “I’m going to f***ing kill you!”

The scene was witnessed by Infowars reporter Joe Biggs who was also filming the incident. The clip shows a Ferguson officer with his gun raised pointing it directly at a citizen journalist who was live streaming at the time.

“My hands are up bro, my hands are up,” states the journalist before the cop responds, “I’m going to f***ing kill you, get back, get back!”

“You’re going to kill him?” asks another individual before the journalist asks, “did he just threaten to kill me?”

When the cop is asked for his name he responds, “go fuck yourself.”

Another clip shows the officer pointing his gun as protesters demand he lower the weapon. A second cop intervenes to make the officer lower his weapon as more irate demonstrators demand to know the officer’s name.

The officer’s response to people asking for his name almost immediately prompted the launch of the Twitter hashtag #officergofuckyourself.

Biggs live tweeted the incident, while Infowars reporter Mikael Thalen also had guns pointed at him during a separate incident.

@PrisonPlanet Had 3 riot cops freakin out, point shotguns @ me when i got isolated bhind building after shtf. Audio/video bad though — Mikael Thalen (@MikaelThalen) August 20, 2014

“Get that camera out of my fucking face.” — officer who pointed gun at protestors #Ferguson — Ryan J. Reilly (@ryanjreilly) August 20, 2014

Other observers called for the officer to be barred from ever being allowed to carry a weapon again.

I’ve had this too. Absolutely no way should #officergofuckyourself be allowed near firearms. Traffic desk job, maybe https://t.co/BmL5fK6jDa

Some even called for the hacker group Anonymous to uncover the cop’s identity.

Biggs took this photograph of the cop at close range. 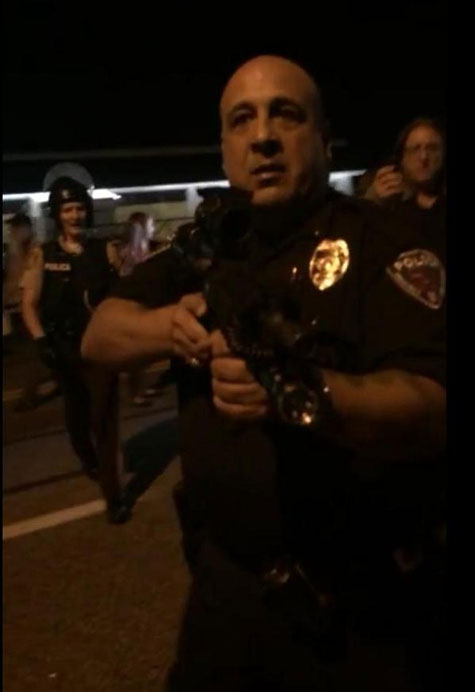 The incident is certain to stoke huge controversy given that authorities in Ferguson have repeatedly broken promises to de-escalate tensions amidst continued unrest.