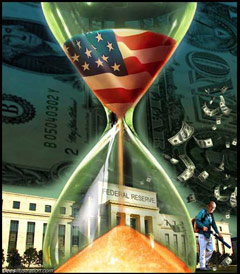 Could things crumble and crash over a simple rate hike?

Many experts say they could, and well, things aren’t so simple after all.

With all things being equal, and with respect to the status quo of the powers that be, the current state of affairs appear very …. um, delicate, and rather prone to disaster.

By the official account, the Federal Reserve has been actively propping up the system with unlimited liquidity and dirt cheap money to the big banks to keep things from going under. Not that this is the whole story, but it’s a decent starting point.

Because they have started something they cannot finish, everything is vulnerable to toppling over the moment that Federal Reserve “stimulus” and “aid” is removed.

Now, even the World Bank is cautioning the Fed against taking action. So what now?

The US Federal Reserve risks triggering “panic and turmoil” in emerging markets if it opts to raise rates at its September meeting and should hold fire until the global economy is on a surer footing, the World Bank’s chief economist has warned.

Rising uncertainty over growth in China and its impact on the global economy meant a Fed decision to raise its policy rate next week, for the first time since 2006, would have negative consequences… It follows similar advice from the International Monetary Fund where anxieties have also grown in recent weeks about the potential repercussions of a September rate rise.

Such a decision could yield a “shock” and a new crisis in emerging markets, Mr Basu told the FT, especially as it would come on the back of concerns over the health of the Chinese economy that have grown since Beijing’s move last month to devalue its currency…. any rise would lead to “fear capital” leaving emerging economies as well as to sharp swings in their currencies. The likely strengthening in the dollar would also hamper US growth, he said.

“I don’t think the Fed lift-off itself is going to create a major crisis but it will cause some immediate turbulence,” Mr Basu said. “It is the compounding effect of the last two weeks of bad news with that [China devaluation] . . . In the middle of this it is going to cause some panic and turmoil.

At the same time, there has been too much unlimited Federal Reserve printing under quantitative easing, rounds QE1, QE2 and QE3 and beyond (rumors of QE4).

There has been a continuous downpour of liquidity under a zero percent interest rate since the financial crisis in 2008 – and as things have played out, this has gone so far that interest rates have actually reached negative.

Negative interest rates are a big problem – that much the system admits.

But it’s damned if you do, damned if you don’t. The Federal Reserve has been terrified to raise rates, because it could unleash all out disaster. But the economy has already returned to the brink, and right now the stock market only appears normal due to artificially propping it up (again).

The Fed is tip-toeing around this potential rate hike because the global economy could falter as a result:

“The world economy is looking so troubled that if the US goes in for a very quick move in the middle of this I feel it is going to affect countries quite badly,” he said.

[…] The Fed’s chair, Janet Yellen, has repeatedly signalled that she expects to raise rates this year for the first time since 2006. (source)

As Peter Schiff and others have warned, the Federal Reserve is reluctant if not refusing to hike rates – though the situation calls for it and has for years – because to do so would mean popping the stock market bubble it has created.

Not only will the global economy take a hit if the rate is hiked, but the move would be equivalent to pointing out that the emperor is wearing no clothes.

Only the Federal Reserve and its Wall Street cronies know full well that the system is a farce and illusion, and prefer to go on profiting at the expense and gullibility of others. Further, the mainstream media, White House and Washington power brokers are all just as willing to keep going along with the lie, because all are invested in maintaining this gross and gargantuan deception.