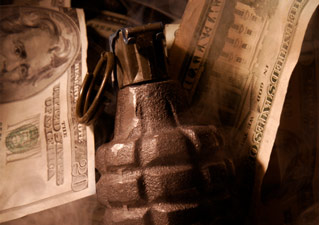 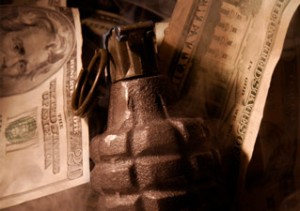 Today, with the United States and the globe approaching another financial cliff, officials from the Federal Reserve are beginning to acknowledge the colossal failure of their quantitative easing program that was instituted in the wake of the 2008 economic collapse.

The Vice President of the St. Louis Federal Reserve branch stepped out to criticize the role that quantitative easing has had on the floundering economic recovery. CNBC reported:

Specifically, he believes the zero interest rates in place since 2008 that were designed to spark good inflation actually have resulted in just the opposite. And he believes the “forward guidance” the Fed has used to communicate its intentions has instead been a muddle of broken vows that has served only to confuse investors. Finally, he asserts that quantitative easing, or the monthly debt purchases that swelled the central bank’s balance sheet past the $4.5 trillion mark, have at best a tenuous link to actual economic improvements.

“There is no work, to my knowledge, that establishes a link from QE to the ultimate goals of the Fed—inflation and real economic activity. Indeed, casual evidence suggests that QE has been ineffective in increasing inflation,” Williamson wrote.

It seems highly significant that a Fed official is fessing up to the detrimental role of his mother organization.

In this video, Gregory Mannarino argues that this internal criticism and public condemnation of Fed policy is a ‘bombshell,’ revealing the weakness of the Fed that critics have long known were there:

What QE has done is put cheap money directly in the hands of the megabanks who caused the crisis, on the pretext that they would trickle down and stimulate the economy. Only the money was invested into its own choice vehicles, with a spending spree driving up asset prices out of the realm of reality and putting homes, loans and investments out of the hands of the crumbling middle class.

Meanwhile, insiders and cronies have multiplied their wealth and a silent inflation has washed over with a tugging undertow dragging down many who are caught up in drowning debt.

Mannarino discussed how the Federal Reserve, a private agency given a private monopoly over the money supply by government, has created a time bomb or debt bomb, waiting to explode a burden cost upon people for generations to come.

Meanwhile, as these financial panelists admitted years ago, the market has long since become enslaved to the central banks – there is no free market, and everyone is going to hurt when the music stops.

The crazy thing is, nobody in charge knows how to stop the thing, or keep it from crashing.