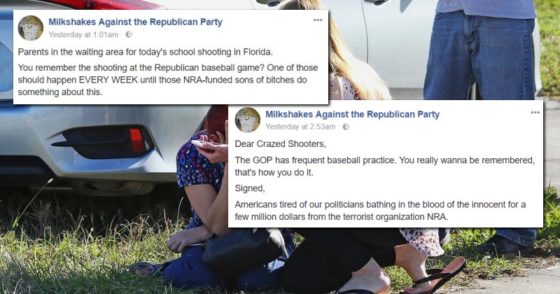 This article was originally published by Paul Joseph Watson at Infowars

A far-left group on Facebook is calling on people to murder Republican lawmakers who support the NRA as revenge for the Florida school shooting.

The unhinged posts appeared on a Facebook group called ‘Milkshakes Against the Republican Party’ in the hours after the massacre at Marjory Stoneman Douglas High School.

“Dear Crazed Shooters, The GOP has frequent baseball practice. You really wanna be remembered, that’s how you do it. Signed, Americans tired of our politicians bathing in the blood of the innocent for a few million dollars from the terrorist organization NRA,” states one of the posts.

The irony of openly encouraging terrorist attacks as revenge against a “terrorist organization” is seemingly lost on whoever posted the message.

“You remember the shooting at the Republican baseball game?” asks another post. “One of those should happen EVERY WEEK until those NRA-funded sons of bitches do something about this.”

Neither of the posts has been removed by Facebook despite being online for approaching 48 hours.

The mention of GOP baseball practice is in reference to the June 2017 shooting of Congressman Steve Scalise, which was carried out by a far-left Bernie Sanders supporter, James T. Hodgkinson, who was attempting to murder as many Republicans as possible.

These posts again illustrate how extremists on both the far left and far right are exploiting the hyper-partisan environment to spread hate and encourage violence.

Leftists on Twitter responded to a parent of one of the victims who lost his daughter in the school shooting with total vitriol merely because the man was wearing a ‘Trump 2020’ t-shirt.

Actual responses to a man whose daughter was murdered in the Florida school massacre. Why? Because he voted for Trump. Some people are sick pic.twitter.com/9jUmHH1wFJ