Facebook Now Demands That You HATE Targeted People Or You Will Be Banned, Too! 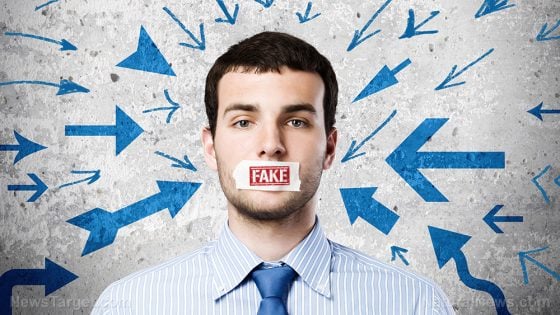 We have now reached the point of total insanity when it comes to extreme censorship by the tech giants. In what actor Rob Schneider calls a “real world Orwellian nightmare,” Facebook has now issued a gag order on 2.2 billion users, demanding that they must HATE certain selected individuals who are named as targets of censorship.

Those individuals include Paul Joseph Watson, Laura Loomer (see FreeLoomer.com), Louis Farrakhan, Milo Yiannopoulos and others. From this point forward, you are only allowed to post content from these individuals if you express hatred toward them in your Facebook post.

This is “mandatory hate speech” by Facebook. That’s how insane all this has become now, which is why I have openly announced that every nation on Earth must declare war against Big Tech (or be destroyed by it).

Breitbart News writer James Delingpole has posted an extremely important article about all this that you absolutely must read. I’m re-publishing it here with credit and a link to Breitbart News, which is also fighting for survival in an age of outrageous Orwellian censorship. Here’s Delingpole’s article:

Good. Let’s hope this is a sign that he intends to take this problem seriously because right now I’d say Silicon Valley censorship poses one of the biggest threats to Western Civilisation in the world today.

Of course, there are other threats at least as dangerous: fundamentalist Islam, China, eco-fascism, neo-Marxism, and so on.

But what’s particularly insidious about Silicon Valley censorship is that it makes all those other threats more pressing and real by making it impossible to speak out against them.

How, after all, are we going to address the issues of rape gangs and church desecrations and terror plots and homecoming Islamic State terrorists if every time anyone tries to discuss them on social media, Silicon Valley decides to close them down for being racist or Islamophobic?

How are we going to face up to the growing menace of hard left outfits like Antifa and Hope Not Hate and Black Lives Matter when Silicon Valley gives them a free pass to spew out their hate while banning all their opponents?

Facebook drops the ban hammer on @PrisonPlanet and other conservatives.https://t.co/sG6mFaLMjw

President Trump urgently needs to get on top of this because the people being silenced are his base. And because social media is often the only place left where they are free — or rather, where they were free — to exchange the kind of conservative thoughts, jokes, ideas, and memes the world so badly needs if it is to counter the creeping menace of identity politics, post-modernism, and Cultural Marxism.

Let’s call out what Facebook is doing for what it is: fascism. It is abusing its extraordinary global power as a publishing platform used by more than 2 billion people in order to impose on all of us its totalitarian leftist new world order.

It justifies its fascistic behavior by pretending it is protecting the world from “hate.”

“We’ve always banned individuals or organizations that promote or engage in violence and hate, regardless of ideology. The process for evaluating potential violators is extensive and it is what led us to our decision to remove these accounts today.”

But today violence and hate are almost overwhelmingly the preserve of the angry, aggressive, radical left, not the playful, irreverent, meme-generating right.

While Antifa is busily laying into Trump supporters with bicycle locks and punching conservatives because, hey, anyone to the right of Bernie Sanders is a “Nazi,” their opponents are fighting back with facts and logic and arguments and wit and jokes.

As Watson says on his latest video — ‘My final ever video?’ — “this is totally political.”

“This is nothing less than election meddling. Everyone Facebook has banned was instrumental in getting Trump elected. This is punishment. This is a political purge. This has nothing to do with ‘hate’ or ‘violating terms of service.’”

Perhaps the most terrifying threats to civilized political discourse today are the asymmetric standards of behavior between those on the left and those on the right. Though the left loves to seize on every scrap of opportunity it can — the senseless murder of MP Jo Cox, for example, by a loner with serious mental health issues; the largely misreported events at Charlottesville — to promote the narrative that the “far right” is on the march.

This is pure projection. It’s the Social Justice Warriors of the radical left and their allies in Big Government, from the Maduro regime in Venezuela to the increasingly brutal Macron presidency in France, who are promulgating and enacting most of the hate and violence.

Facebook is not doing anything meaningful to stop hate and violence. “Hate” is term so nebulous — its meaning so entirely dependent on the mindset of the beholder, and so debased by cry-bully progressives — that it cannot reasonably be used as any kind of objective criterion for a censorship policy.

“Violence” is — or at least was, till the left cynically redefined it in order to expand its potential number of victimhood categories — a physical act and therefore quite beyond the proper purview of a site dedicated to words and images.