Explosive Interview: I Just Got Off The Phone With Ryan Bundy And You Won’t Believe What He Told Me! 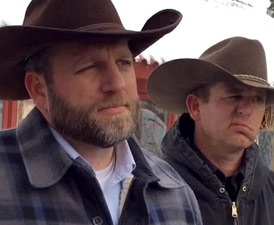 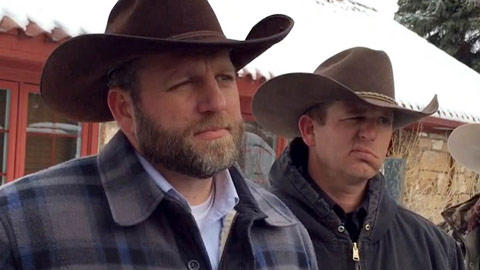 (Ammon Bundy and Ryan Bundy speak with the press outside the Malheur National Wildlife Refuge near Burns, Oregon)

I just got off the phone with Ryan Bundy who represents the armed group Citizens for Constitutional Freedom currently occupying a federal building at an Oregon wildlife refuge and you won’t believe what he said!

“I am actually pretty disappointed in that but I do understand their decision. It was the Hammond’s decision themselves to turn themselves in,” Ryan Bundy told me.

My personal feelings are—well I had a direct conversation with Dwight Hammond just two days ago and I asked Dwight: is this really what you want? Do you really want to go to prison? Is that what you really feel you want to do?And well he got angry at me. He said, of course not, of course not. But he said they will put a bullet in my head. He goes they will kill me without hesitation. And he goes, and they will throw me in the back of the truck. And he goes, I will not be the only body there. […] They—meant anyone else supporting them.

And so he reported to prison not out of duty, not out of respect for the government, not out of guilt for crime that they say he committed, it was simply out of fear of the oppressive government.

Our groups ultimate goal is to restore and defend the Constitution and particularly the rights of the people in this county.

Do you guys plan to make a stand or do you plan to retreat at this point?

Regardless of what they are doing does not weigh bearing on what we are doing. I mean obviously we are here because of what’s happened to them and the many others, but their [the Hammond’s] retreat does not dismay us at all.

The FBI has a long history of inserting provocateurs into these type of things. Do you believe that any provocateurs have been planted on scene?

Well you know, we are aware of such things that take place, you know, and we try and catch that etcetera. I see lots of proctors online, so to speak. But yeah we’re weary of that, but what are you going to do.

Do you realize that a good portion of the mainstream media has actually turned Americans against you and have even labeled you a terrorist?

“Well they labeled us terrorists several years ago so that’s not new. You got to look at the definition of terror.”

“Define it for me. You define terror for me,” Ryan Bundy asked me.

I responded, “I guess something that scares someone.”

“Would you say that terror is extreme fear,” Ryan asked.

I answered, ‘I would say the word has a heightened sense of fear.’

“Alright so extra fear. Alright so a terrorist is one that uses extreme fear to control a situation. To control a political situation or any particular situation, so that would define terrorism,” Ryan said.

That’s what terrorists have done,. They have used bombs and bomb threats […] in public crowds […] like the Boston bombing. […] They were using extreme terror to try to control or gain position or something. […] terrorism is extreme fear to control the situation.

Dwight Hammond, he was in fear of being shot in the head. He was fearful for his life, his family’s life. He was fearful of others around him. So who has been using those tactics against him? The government has. So who are the terrorists?

When I asked Ryan Bundy if President Barack Obama’s announcement of executive action on firearms this week is related to the timing of their demonstration, he said, “[…] somewhat.”

Now if they [the government] come there and try to provocateur and escalate the situation will you guys try and defuse it?

“Those are questions far and beyond what I will answer at this time.”

Ryan also told me that he has no knowledge of any minerals, precious metals or uranium being located on or near the Hammond Ranch which was speculated to be a potential motive of the federal government to do what they are doing.

Ryan also said he has seen absolutely no sign of any government official or law enforcement agent on scene.

Shepard Ambellas is an activist, journalist, filmmaker, film producer, radio talk show host and the founder and editor-in-chief of Intellihub. Established in 2013, Intellihub.com is ranked in the upper 1% traffic tier on the World Wide Web. Read more from Shep’s World.