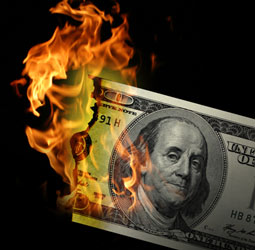 Though completely outside the realm of possibility for an entertained, well fed, and oblivious American public dependent on ever-growing debt to make ends meet, there are serious economic, financial and monetary headwinds set to flip the entire system upside down. If there’s one thing we can learn from the collapse of monetary systems in Zimbabwe, Argentina, and most recently Venezuela, it’s that printing money only works until you lose the confidence of your creditors and the public at large, at which point the whole thing detonates with such velocity and speed that millions are left scrounging for even the most basic of necessities.

According to K92 Mining President Bryan Slusarchuk, this is exactly the kind of scenario Americans should be concerned with because central banks and governments around the world have not only printed obscene sums of money to keep the system afloat, but used even more worthless foreign currency reserves to further prop up their own. As Slusarchuk notes, there is absolutely nothing of real value backing any of it, which spells disaster for Western nations:

Western nations have central bankers colluding together trying to prop up eachother’s reserve with equally worthless foreign currency reserves that are fiat-based paper. Unfortunately, I just don’t think this ends well for Western countries like the United States and Canada who have lost sight of this…

In his latest interview with SGT Report, Slusarchuk explains why a hyperinflation scenario akin to what we are witnessing in Venezuela is a distinct possibility and what those who will take the brunt of the pain – the average people on the ground – can do to prepare themselves for this inevitable future reality. As Slusarchuk warns, most people won’t figure out what has happened until it’s already too late:

…There are lessons [we can learn from Venezuela]… It appears to be spiraling out of control… and this all results from the fact that you had bankers that didn’t understand how to ensure there is a real worth to their fiat currency… this lesson is a lesson we’re going to figure out once it’s too late.

Some 65% of Americans receive more in federal transfer income than they pay in total taxes. There are estimates that this can grow to 80% in the not-too-distant future. So when you have a situation like this that is clearly not sustainable and you have central banker collusion supporting one another’s worthless paper currencies with more worthless paper currency reserves… it just doesn’t end well.

Slusarchuk suggests hard assets as insurance against this eventuality. As we’ve seen in Venezuela, core necessities for survival like bread and meat, as well as supplies we take for granted like toilet paper, are the first to go because a country whose currency has collapsed and lost the faith of its creditors can no longer trade with foreign companies to import these goods, nor can they pay domestic workers to produce them. As the President and Director of a gold mining company, he does, of course, recommend precious metals as a currency of last resort to counter the effects of hyperinflating fiat dollars.

It’s a strategy, notes Slusarchuk, that has protected and preserved wealth for over 5,000 years. And it’s one that’s being aggressively implemented right now by China, who unlike their Western counterparts that have sold their precious metal reserves, are acquiring massive stores of gold.

A similar strategy, he argues, should be a part of everyone’s collapse-proof portfolio:

I think it’s so important for investors to consider, not just for the upside, but for protection… for safety… gold and silver as part of their investment strategy.

And when things don’t end well… It’s going to be very worthwhile to have that real store of value.

I think people in Venezuela are seeing that today… and you’ve seen that in other countries like Argentina.

History continues to repeat itself.

But, central bankers  want to assure us that everything is OK… that gold no longer has real value.

… as groups and governments in places like China continue to gobble up everything they can get their hands on… you’ve really got to question what side of the trade you want to be on.

Venezuela is a great example of the hyperinflationary currency collapse that all countries potentially face when they don’t have true holdings as a store of value that act as a guarantee to redeem promises to creditors.

Contrarian economists like John Williams have repeatedly warned of hyperinflation in the United States. That some 60% of Americans are now dependent on government subsidies, including nearly 50 million on food stamps, is a critical warning sign. So, too, is the fact that incomes are dropping and meaningful jobs are drying up.

Media pundits and government shills, just as they have done in Venezuela, continue their propaganda campaigns with many pointing to stock markets as a measure of health and marginalizing those who warn of impending collapse as “peddling fiction.”

But to those paying attention, even that is a massive warning sign of a system so heavily injected with artificial stimulus that when the central bank’s dope finally runs out there will, quite literally, be a life threatening crash.

Those without hard assets to get them through the aftermath could well find themselves with no food, no shelter, and no prospects for recovery.

To learn more about Bryan Slusarchuk and his latest production projects visit K92Mining.com.

For more interviews like the one you just watched visit SGT Report.