Expert Warns of Hyperinflation: “The American Way Of Life Will Be Destroyed” 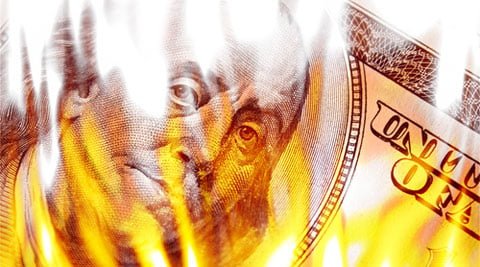 If there’s one thing that’s certain about what’s happening in the world right now  it’s that uncertainty is pervading every aspect of the global economy. From fabricated employment statistics and consumer spending reports to obscene levels of debt and a failing domestic monetary policy, the writing is on the wall.

According to top Casey Research analyst Marin Katusa, who has met with energy ministers and business leaders in over 100 countries, it’s only a matter of time before the world’s reserve currency goes the way of the German Reichsmark and Zimbabwe Dollar.

What we’re talking about here is nothing short of an outright collapse of our banking system, hyperinflation of the US dollar, and a complete destruction of the world as we have come to know it.

This is a must-watch for those trying to understand what’s happening with the economic landscape, how to position yourself for an unprecedented paradigm shift in how Americans live their lives, what to expect as this crisis unfolds, and how to find opportunities when everyone else is in panic mode.

If the petro-dollar ends, the American way of life will be something that will be destroyed.

The inflation will be over 100% because Americans are getting their lifestyle subsidized by the rest of the world.

This is a very complicated issue… but to be summed up quickly, the world has already started trading commodities and oil, not in the petro-dollar.

And if the petro-dollar finally does die, the American way of life is gone.

When that happens – when the rest of the world finally turns its back on the United States – you’d better be positioned in the right assets… tangible assets.

Failure to do so will leave you exposed to a financial collapse unlike anything we’ve ever seen in America.

And I’m not trying to be a doom and gloom guy, this is just factual.

You want to invest in silver, and gold, and companies that produce what the rest of the world wants, which is gold and silver.

It should be clear that China, Russia, oil-producing nations and emerging markets are positioning themselves for exactly what Marin Katusa describes. They have already established unilateral agreements to replace their petro-dollar transactions with either their own currencies or gold. When the timing is right, they’ll pull the plug, at which point all hell will break loose.

The only assets that will survive the destruction will be physical goods such as those commodities essential to survival – food, energy, water, etc.

On the monetary front, when the dollar becomes worthless, confidence in the system itself will be lost on a global scale. We saw similar effects in 2008, when banks refused to lend to businesses, individuals and even themselves for fear of counter party risk. This will leave only one viable mechanism of exchange that will be trusted by trading partners. If you happen to own some, then while everyone else is trying to figure out how to acquire food or pay for other needs, you’ll be thriving.

Insiders and the well informed like Doug Casey, Rick Rule, and Eric Sprott who want to protect and preserve their wealth are already diversifying out dollar-denominated assets. Foreign governments are doing the same, to the tune of billions of dollars being used to buy up assets in the gold production and mining sector (something sovereign wealth funds also did back in late 2008 at the height of the crisis):

The money now is showing up. For example, Rick [Rule] went and got Korean money, and then also Chinese Money. That’s a billion and a half dollars that is coming in to this sector. K.K.R, a major fund, has now put up a billion and a half dollars to set up shop in Calgary for the junior resource sector. You see a lot of funds now, starting to say, “hey, we are getting back in to the junior resource sector because it is so cheap.”

If you go to the BRI website, they talk about all of the big shareholders. You have Tocqueville, Sprott, Sun Valley, KCR…

There’s a reason that well known investment firms run by contrarians like Sprott and Casey are buying gold. Because they know what is coming down the pike.

Yellen is going to continue where Bernanke left off, with the troubles. And the reality is, this is going to make a stronger bull market for gold and silver, and it’s going to be even a better market for the junior resource sector.

If gold and silver are heading to new highs it’s because something has gone terribly wrong in our economy and financial markets.

That being said, if gold is rising and the dollar is collapsing then in all likelihood we’ll see stratospheric price increases in everything from food to fuel, so preparing a contingency plan for this scenario is absolutely critical.

The scenario described here, as noted by Marin Katusa, is not just doom and gloom. It’s fact. The system as we know it is under pressure from all sides. When it implodes you’d better be ready.