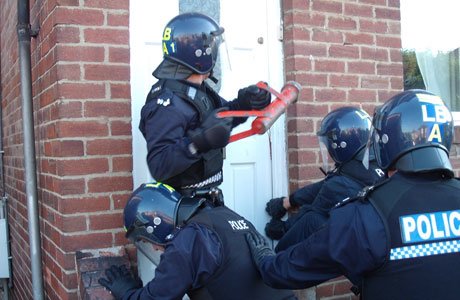 It seems no matter how many laws and mandates government passes, whether on the federal, state or local level, it’s never enough.

The latest violation of the right to be safe in our homes and our persons comes from the Indiana Supreme Court:

According to Newton County Sheriff, Don Hartman Sr., random house to house searches are now possible and could be helpful following the Barnes v. STATE of INDIANA Supreme Court ruling issued on May 12th, 2011. When asked three separate times due to the astounding callousness as it relates to trampling the inherent natural rights of Americans, he emphatically indicated that he would use random house to house checks, adding he felt people will welcome random searches if it means capturing a criminal.

Granted, this is a State Supreme Court and the US Supreme Court could throw out the decision as unconstitutional, we aren’t holding our breath. Just yesterday, the US Supreme Court ruled 8 to 1 that Kentucky police who smelled marijuana at an apartment door, knocked loudly and announced themselves, and then kicked in the door when they thought the drugs were being destroyed did nothing wrong. The similarities in the rulings cannot be ignored. You see, in the Kentucky US Supreme Court ruling, the police officers who kicked in the door had been tracking a criminal in the area. As they were walking around the neighborhood, they indicated that they smelled marijuana, and came to the conclusion that the criminal they were tracking must be the one smoking it. They then kicked the door down. The resident of that dwelling, who had no relation to the original criminal or crime committed, was then arrested.

No matter your stance on marijuana laws, Karl Denninger highlights why this is a dangerous precedent:

The primary problem with these sorts of cases, of course, is that the law exists at all on this basis.  We create circumstances in which the police have to manufacture cause to bust in a door behind which adults are peacefully conducting themselves in consensual conduct.  Having passed laws that are logically indefensible from the first principle that you own your person we are then forced to create more and more elements fo an outright police state to “enforce” these misguided and logically defective statutes.

First the government provided billions in funding for street cameras for just about every major intersection in the country. They required roving bug technology in all new cell phones. They created cyber security divisions whose sole purpose is to monitor internet traffic – everything from email and text messaging to phone calls and online community forums. They even made investments into large internet firms so that they can create and monitor social trends and relationships. To store, process and cross examine all of the data, they created Fusion centers in most U.S. metropolitan areas.

As if that weren’t enough, the government is now further expanding its power. They tell us what to eat – what’s healthy (e.g. GMO foods and rBST infused milk) and what’s bad for our diet (natural foods, sugar, salt). They tell us when and where to go for health care. They decide who can be groped in public and why.

Now, they can choose to enter your home, for virtually any reason, and if you happen to be breaking one of the tens of thousands of laws that exist on the books, you are jailed. Even if you aren’t breaking the law, and completely within your Constitutional, State and local rights, you may end up like Mark Fiorino, a 25-year-old IT worker who was recently detained by police for lawfully open carrying a firearm. Police assumed he was breaking the law (apparently they didn’t know the law). He wasn’t. That didn’t stop them from threatening to shoot him. He was eventually released and not arrested for the firearm issue. He was, however, arrested after he released a Youtube audio clip of the encounter. According to police. Fiorino was charged with reckless endangerment and disorderly conduct because he refused to cooperate with police.

Are we living in the same America we did ten years ago?