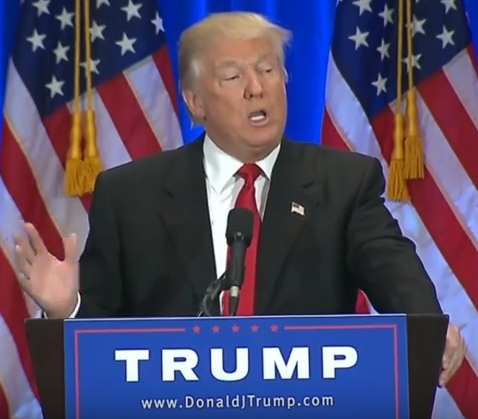 This one is for the record books.

Seriously… there’s always heightened campaign rhetoric; but usually it is pillow fighting for two parties that are in bed together screwing the country.

But this campaign year is different. Donald Trump absolutely unleashed on Hillary Clinton in a way that may well be historic.

Secrecy, lies, theft, death, graft, bought-out strings from powerful donors and an absolutely criminal candidate. The accusations are well-based in decades of absurd and vicious ambition by Hillary, who clearly will stop at nothing to get power. For that price, she has handed over much to those who should have no control of the country.

“They totally own her,” Trump charges. The special interests have likely never more fully bought out a political figure more so than they have the Clinton family.

From theft and the politics of personal profit… he accuses Hillary of running the State Dept. like a hedge fund and taking cash from foreign governments in turn for access and favorable policies.

“Desperately, we need those jobs.”

But probably the biggest issue Trump strikes a chord on is trade – from international trade deals like NAFTA and the still-pending TPP, promotion of cheap manufacturing in China at the expense of American jobs, the country is in shambling and the middle class has slowly died largely due to policies from the Clinton and Bush administrations.

Love him, or hate him, Donald Trump absolutely rails against the price that Americans have had to pay for the rise of globalism – Clinton-style and otherwise – in a way that no major candidate ever has since the age of globalism began in the latter half of the 20th Century.

“Hillary gets rich while making you poor,” Trump charges. If Hillary gets the presidency, “We will lose our country,” he warns.

“She should be in prison.”

There’s much more, but this is no ordinary speech.

In the last prize fight, Trump destroyed the Bush legacy and made a fool of Jeb! Now, he is taking on the true heavyweight usurper Hillary. Both had it coming badly. Trump could throw the fight and give her an easy crown…

But here, Trump lays it all out. Is he for real?

MUST WATCH: The Video Hillary Clinton Doesn’t Want You To See: If This Goes Viral Trump Will Be Elected President

Dr. Doom Warns: “Hillary Will Destroy The Whole World… Look How Successful Her Nation Building Has Been”