EPA Administrator: The War On Coal Is Over! 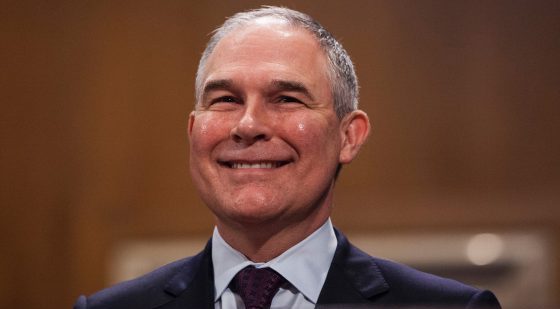 “The war on coal is over,” EPA Administrator Scott Pruitt declared in the coal mining state of Kentucky. The head of the Environmental Protection Agency said Monday that he will sign a new rule overriding the Clean Power Plan, an Obama-era effort to limit carbon emissions from coal-fired power plants.

Pruitt has long rejected the government consensus that man-made emissions from burning fossil fuels are the primary driver of global climate change – or is it global warming? President Donald Trump, who appointed Pruitt and shares his skepticism of the often fabricated climate science, promised to kill the Clean Power Plan during the 2016 campaign as part of his broader pledge to revive the nation’s struggling coal mines and boost the economy.

Obama’s plan was designed to cut the United States carbon dioxide emissions to 32 percent below 2005 levels by 2030. The rule dictated specific emission targets for states based on power-plant emissions and gave officials broad latitude to decide how to achieve reductions. However, it was the broad executive overreach Obama became known for that some states took issue with.  The Supreme Court put the plan on hold last year following legal challenges by industry and coal-friendly states.

Pruitt is expected to declare that the Obama-era rule exceeded federal law by setting emissions standards that power plants could not reasonably meet. Appearing at an event with Senate Majority Leader Mitch McConnell, Pruitt said, “The EPA and no federal agency should ever use its authority to say to you we are going to declare war on any sector of our economy.”

“This president has tremendous courage,” Pruitt said Monday. “He put America first and said to the rest of the world we are going to say no and exit the Paris Accord. That was the right thing to do.”