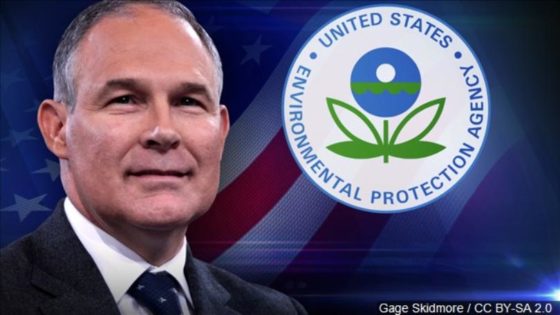 Some of the most expansive regulatory initiatives have been undertaken in the name of “secret science”: scientific research unavailable to the public the regulations inhibit. But Scott Pruit now has environmentalists scared stiff as he plans to expose this “science” ending the EPA’s reign on environmental tyranny.

A proposed rule announced a week ago by Scott Pruitt the of the Environmental Protection Agency, and blasted by the mainstream media, is intended to bring much-needed transparency to agency rule-making. The environmental lobby is terrified about the proposal, even though it aligns perfectly with its long-held commitment to the public’s “right to know” principle.  Basically, the EPA writes rules and regulations the public is forced to adhere to based on “science” that the public is also not allowed to see.  Pruitt plans to change that.

The proposed regulation would require the EPA to ensure that the scientific data and research models “pivotal” to significant regulation are “publicly available in a manner sufficient for validation and analysis.”

Many mainstream media outlets claim that this new rule would “undermine” climate science.  But that only happens if the science used to enforce new regulations and taxes is junk science (in which case, it should be undermined), so what is there to worry about? Plenty if your religion is climate change:

Despite existing rules on government use of scientific research, federal agencies routinely mask politically driven regulations as scientifically-based imperatives. The supposed science underlying these rules is often hidden from the general public and unavailable for vetting by experts. But credible science and transparency are necessary elements of sound policy.

The opposition from greens and much of the media greeting Pruitt’s announcement is, frankly, hypocritical in the extreme. Opponents claim that the EPA’s regulatory power would be unduly restricted if the agency is forced to reveal the scientific data and research methodologies used in rule-making.

But that is precisely the point. The EPA should no longer enjoy free rein to impose major regulations based on studies that are unavailable for public scrutiny.–Heritage.org

Despite the “science” used to declare climate change such a human problem that taxes and job debilitating regulations be enforced already much-known as “junk,” Pruitt intends to let everyone know that they’ve been duped in order to be treated like cash cows and government slaves.

Some claim that research subjects’ privacy would be violated, but that is disingenuous and completely groundless. Researchers routinely scrub identifying information when aggregating data for analysis and personal information is not even relevant in agency rule-making.

The proposed rule is not radical, in fact, it’s taking a bite from totalitarianism, yet you’ve got a huge population of sleeping sheep who would simply rather be told what to do than actually read any kind of research (or lack thereof) that leads to their own oppression.