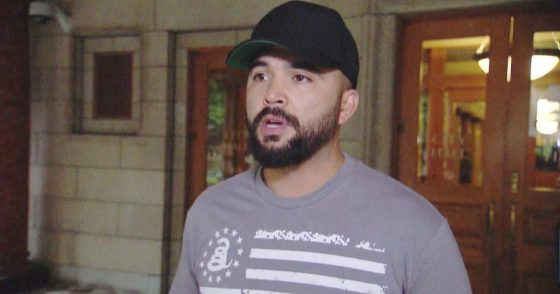 San Francisco city leaders are terrified of violence at a Patriot Prayer Rally. They have dubbed it a “rally by a far-right group” and on Saturday, the city will bring in the entire police force work that day.

When a group that claims its intention is to promote peace, love and unity applies for government permission (a permit) to hold a prayer rally (free speech) in a national park, Democrats like Nancy Pelosi declare them “white supremacists” and a “hate group.” In fact, that was the first reaction after the city approved the permit for the Patriot Prayer Rally in the park. The second response? The city of San Fransisco is rallying their entire police force to make sure those who participate in the prayer rally stay in line.

Patriot Prayer bills itself as a peaceful First Amendment advocacy group that appears in locations where there have been past confrontations over free speech. For example, Patriot Prayer organized the Evergreen State College protest outside Seattle where Gibson was pepper sprayed by counter-protesters. According to their Facebook page, Patriot Prayer is also dedicated to fighting government corruption. Now it makes sense that they’ve been labeled as “extremists” by the left.

Th founder of Patriot Prayer, Joey Gibson explained in a video what his group is actually about, and it isn’t white supremacy.

It sounds like Patriot Prayer is attempting to unite Americans rather than divide. It makes sense now that the government is afraid of this group. Propaganda is very powerful, and there are some very rich and very powerful politicians that rely on a divided America, as Patriot Prayer points out. Leftist groups don’t want unity, as that would be needed to squash the corruption in government. Not even Southern Poverty Law Center is as harsh on the Portland-based Patriot Prayer as the government is. SPLC described  Patriot Prayer as an “alt-right” group and has dubbed this event “Free Speech, Unity and Peace San Francisco,” billing it as “a day of freedom, spirituality, unity, peace, and patriotism!” Oh, the horror!

“Every available officer is expected to be working on Saturday,” said San Francisco Police Sgt. Michael Andraychak. “So no discretionary time off and days off have been canceled.” San Francisco Mayor Ed Lee Lee had a message for those who oppose groups like Patriot Prayer. “We will be doing an alternative rally Saturday here at Civic Center,” Lee said. He is urging people to stay away from the event at Crissy Field.

Gibson says that all he’s trying to do is inform supporters of Antifa (a broad group of left and far left leaning people) about the violent ways of the group to “bring them out of the darkness” and he says he has made converts like Tara “Bern.”

Tara, a Bernie Sanders backer who now lives in Washington state and served in the army, uses “Bern” as her last name on Facebook to “protect my family when I get into politics.”

Tara wrote on Gibson’s Facebook page that she marched in Seattle with Black Lives Matter, Antifa and other leftist groups because she “heard there was a Nazi rally.”

“As we marched past the police towards the rally, my group was yelling and cussing at the officers and at that exact moment,” Tara wrote, “I felt in my heart it was wrong.”

When she finally reached the supposed ‘Nazis,’ she found out they were actually just a free speech group.

“Speakers were preaching about love and peace, and my group wanted to rip them to shreds.  I felt in my spirit that what the Antifa were doing by calling everyone to violence, was wrong,” said Tara. –Fox News

All police are on duty for this peaceful rally, but based on evidence, Antifa and far left groups inciting violence are the main cause for concern.