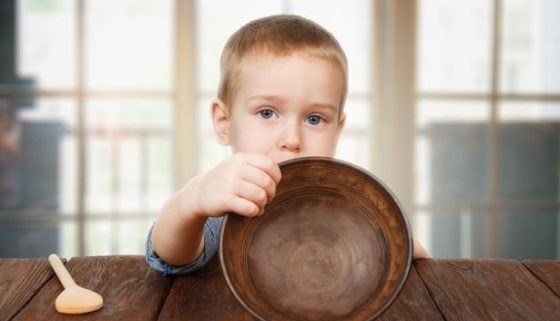 The heads of schools from various parts of England and Wales have described differences in the appearance of some of their pupils. Poverty stricken children are “grey and pale” and fill their pockets with food so they can have something to eat.

And the problem is only worsening as government regulations and tax burdens continue to make it hard for everyday people to get by.  According to the BBC, on school head was quoted saying, “My children have grey skin, poor teeth, poor hair; they are thinner.” Lynn, a head teacher from a former industrial town in Cumbria, who did not want to give her full name, was one of a number of head teachers speaking to reporters at the National Education Union conference in Brighton.

Even though the government said measures were in place to tackle poverty, much of the UK is sliding into abject poverty as the country inches closer to Communism. “Children are filling their pockets with food. In some establishments that would be called stealing. We call it survival,” Lynn said.

Jane Jenkins, a head teacher from Cardiff, said children in her school often only brought a slice of bread and margarine for lunch and that teachers supplemented this. “It’s really difficult and when people are asking you about standards, why we don’t go up the league tables?

There’s also becoming a stark difference between the wealthy and the poor. “When you take children out to an event, maybe a sporting event, you see children of the same age from schools in an affluent area. It’s the grey skin, the pallor. It’s the pallor you really notice,” said another teacher.  “Monday morning is the worst.  There are a number of families that we target that we know are going to be coming into school hungry. By the time it’s 9:30 am they are tired.”

The teachers are also washing the grubby clothes for the children who can’t afford to even clean the few pieces of destroyed clothing they own. “We have washing machines and we are washing the children’s clothes while they do PE,” said Lynn.  “We wouldn’t have it that these children are stigmatized because their clothes are dirty.”

Howard Payne, a head at an inner city school in Portsmouth, said there had been a four-fold increase in the number of children with child protection issues. “Every one of these issues has had something to do with the poverty that they live in,” he said. “It’s neglect. It’s because they and their families don’t have enough money to provide food, heating or even bedding.”

As poverty increases too, governments usually attempt to solve the problem by raising taxes, which pushes those already borderline into poverty as well, exacerbating the problem exponentially. More government is never the solution to the problems the government created in the first place.