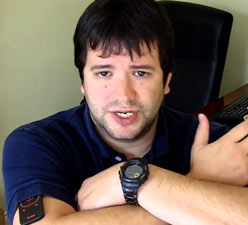 The following interview was originally published at Peak Prosperity.

As we write about the risks of our over-indebted economy, of our unsustainable fossil fuel-dependent energy policies, and our accelerating depletion of key resources, it’s not a far leap to start worrying about the potential for a coming degradation of our modern lifestyle — or even the possibility of full-blown societal collapse.

Sadly, collapse is not just a theoretical worry for a growing number of people around the world. They’re living within it right now.

This week, we catch up with Fernando “FerFAL” Aguirre, who began blogging during the hyperinflationary destruction of Argentina’s economy in 2001 and has since dedicated his professional career to educating the public about his experiences and observations of its lingering aftermath. He is the author of Surviving the Economic Collapse and sees many parallels between the path that led to Argentina’s decline and the similar one most countries in the West, including the U.S., are currently on. Since our 2011 interview with him “A Case Study in How An Economy Collapses“, FerFAL has successfully relocated his family to Europe.

Given his first-hand experience with living through, and eventually escaping, economic collapse in South America, we asked him to offer his insider’s perspective on the current crisis in Venezuela, as well as the devolving situation in Brazil:

The greatest points to keep in mind is overwhelming corruption. People get lost on what exactly went wrong in Argentina, in Venezuela, or what’s happening right now in Brazil. What they all have in common is that the people in charge had no real interest in doing things right; they really didn’t care about destroying the country. They just cared about filling their pockets as much as possible.

Think of Venezuela this way: you have a country where water is more expensive than gasoline. What sense does that make? I mean, you had Hugo Chavez walking down the street pointing with his finger saying “Nationalize this. Nationalize that”. And when he was saying “nationalize”, he was saying “Steal this“. He didn’t have any great plans or political grandeur going on in his mind. He just wanted to steal as much as he could.

I know for a fact that they’re slaughtering one another in the streets right now in Venezuela. For at least three years it’s been a case of out-of-control crime and corruption over there. It’s not getting better any time soon unless something changes on a deeper level.

For the average “middle class” person in Venezuela — educated and still holding on to a good job — he needs two years of wages to buy a single plane ticket in his own currency. He needs to work for two full years to buy one single plane ticket — he’s stuck there. The problem is that he waited too long to leave. That’s something important that I write about often: You have to know when to leave. You needed to leave Venezuela at least three or four years ago; now you’re getting to the point where you’re stuck there. The official exchange rate between the USD and Bolivar is 1 to 10, but unofficially which is the real one you experience,  is more like 1 to 1,000. So they basically are starving you to death through a completely devaluated currency which is what you’re getting paid in.

Basically need to find ways of leaving the country by any means possible. What I would do if I was in Venezuela right now is I would leave on foot. I would leave any way I could, because it’s not safe. I know people that have killed people surviving Venezuela, I actually know guys that had to do that to live. You can’t even find some land and grow your own food. You cannot do that when you have the government stealing it from you. It’s a no win situation.

Click the play button below to listen to Chris’ interview with Fernando “FerFAL” Aguirre (55m:03s).

A heads up: the audio quality of this podcast is not at our usual standards, due to the phone conditions in Spain where we managed to contact Fernando.

For more actionable information and more interview like this one visit Peak Prosperity.

You can visit FerFal’s web site at The Modern Survivalist.

For a detailed overview of how collapse happens and how to survive when it reaches your own city or neighborhood we encourage you to read his first-hand account in Surviving The Economic Collapse.