After trade worries triggered the biggest sell-off of 2019, and economic analyst at Nomura is sounding the alarm bells. The economy’s future is gloomy and the outlook ominous according to Nomura strategist Masanari Takada.

It finally appears that more are able to see this “booming” economy for what it really is: a massive wealth transfer scam.  Takada has even said that the recent recovery of stocks Tuesday is likely the calm before the storm and he’s warning investors to brace themselves for a possible “Lehman-like” aftershock following Monday’s broad sell-off.

According to the Financial Times, the market has grown increasingly concerned over the fallout from a more contentious US-China trade row. While some analysts have warned of rising recession risks, others have been less ominous in their forecasts that suggest more volatility in stock markets should be expected, amid an uncertain outcome to trade talks and a more hawkish Federal Reserve than investors had hoped.

Takada says that the volatility in the stock market will come in two separate waves. Takada cited the sell-offs that historically occur in August and the selling by hedge funds and trend-following algorithmic traders. The latest retreat out of equities signaled that the first wave of volatility has arrived, he said. But making matters worse, the VIX volatility index — known as Wall Street’s “fear gauge” — is now above 20.

“We would add here that the second wave may well hit harder than the first, like an aftershock that eclipses the initial earthquake. At this point, we think it would be a mistake to dismiss the possibility of a Lehman-like shock as a mere tail risk,” he wrote to clients, referring to the collapse of the Lehman Brothers investment bank during the 2008 financial crisis.

The stock market’s plunge could arrive as soon as late August (mere weeks away). That gives little time to prepare financially for those who have consistently rejected the evidence that this economy is a house of cards built on sand during a hurricane.  “The pattern in US stock market sentiment has come to even more closely resemble the picture of sentiment on the eve of the 2008 Lehman Brothers collapse that marked the onset of the global financial crisis.” 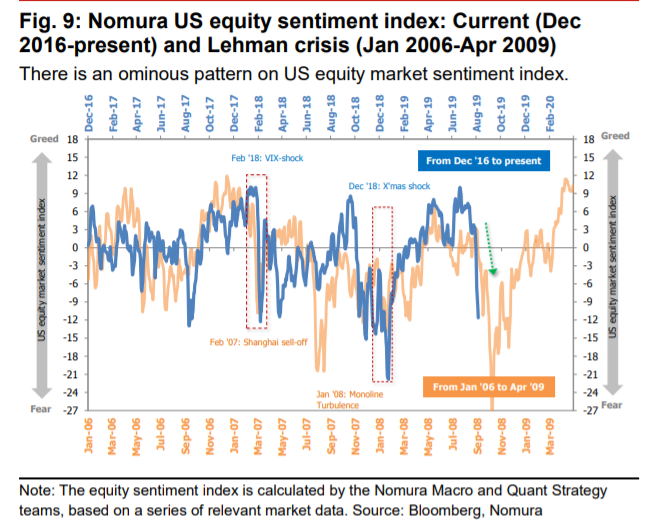 “We would expect any near-term rally to be no more than a head fake, and think that any such rally would be best treated as an opportunity to sell in preparation for the second wave of volatility that we expect will arrive in late August or early September,” Takada said. “We would add here that the second wave may well hit harder than the first, like an aftershock that eclipses the initial earthquake.”

Written by Tess Pennington, The Prepper’s Blueprint: The Step-By-Step Guide To Help You Through Any Disaster

is an easy to follow “blueprint” for preppers or survivalists.