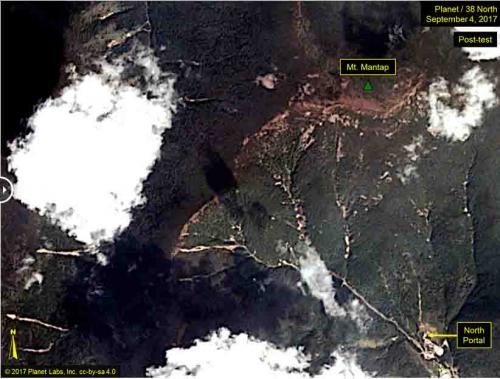 In what may be the latest major escalation involving North Korea – and potentially the nation’s 7th nuclear test – China’s earthquake administration said it detected a magnitude 3.5 earthquake in North Korea, which it suspects “was caused by an explosion”, raising fears that the rogue state has tested another nuclear bomb. The Chinese administration said in a statement on its website that the quake was recorded at a depth of zero kilometers, while Xinhua said the epicenter was in roughly the same place as a similar shallow earthquake on 3 September, which turned out to be caused by North Korea’s sixth and largest nuclear test.

However, in analyzing the same earthquake, South Korea came to a different conclusion, and said it was likely to be natural or man-made such as a nuclear test. South Korea’s weather agency assessed the seismic activity as a natural event.

“The quake is presumed to have occurred naturally,” an agency official said, according to South Korea’s Yonhap news agency. “A sound wave, which is usually generated in the event of an artificial earthquake, was not detected.”

“We use several methods to tell whether earthquakes are natural or manmade,” an official, who asked for anonymity, told the Independent. “A key method is to look at the seismic waves or seismic acoustic waves and the latter can be detected in the case of a manmade earthquake. In this case we saw none. So as of now we are categorizing this as a natural earthquake.”

Furthermore, all of North Korea’s previous six nuclear tests registered as earthquakes of magnitude 3.9 or above. The last test on 3 September registered as a 6.3 magnitude quake. A secondary tremor detected after that test could have been caused by the collapse of a tunnel at the mountainous site, experts said at the time.

As shown previously, satellite photos of the area after the 3 September quake showed numerous landslides that were apparently caused by the huge blast, which North Korea said was a hydrogen bomb. It is possible the tremor was linked to ongoing landslide activity.

Overview of Punggye-ri Nuclear Test Site Before the nuclear test:

Nuclear proliferation watchdog CTBTO said on Saturday it had detected two seismic events in North Korea on Saturday but they were probably not deliberate explosions.

Concerns about another North Korea test have been heightened ever since Foreign Minister Ri Yong Ho, who is currently in New York for a United Nations meeting, warned on Thursday that Kim could consider a hydrogen bomb test of an unprecedented scale over the Pacific. Ri told reporters that a test of “the most powerful detonation of an H-bomb” was one possible “highest-level” action against the US.

But he said that he did not know exactly what his state’s exact plans were. “We have no idea about what actions could be taken as it will be ordered by leader Kim Jong-un,” he added.

The quake comes amid heightened tensions around the Korean Peninsula, as the North has been maintaining a torrid pace in nuclear and weapons tests. The state said its recent nuclear test was a detonation of a thermonuclear weapon built for its developmental intercontinental ballistic missiles. In two July flight tests, those missiles showed potential capability to reach deep into the US mainland when perfected.